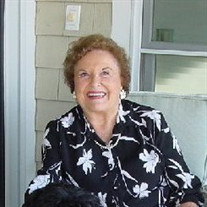 Elizabeth “Buff” Hedges Stokes Witteveen, aka "Dinda" to her grandchildren, peacefully passed from this life to the next on Sunday, September 21, 2014 at the Grand Traverse Pavilions. It has been a privilege for our family and her many friends to have joined Buff in her journey. Her tenacity for life, for laughter, for love will long be remembered by all of us and we will continue to walk in her footsteps for decades to come. Buff was born on November 1, 1921, making almost 93 years of cheerful and positive living. Whether hula dancing in Hawaii, bungee jumping off an incredibly tall bridge in New Zealand, white-water river rafting in Colorado, her hot-air ballooning in Traverse City or spending time with friends all over the world, Buff made every moment of her life a moment to make a memory. Her life was made of many special moments and the making of special friends along the way. She was preceded in death by her husband, G. Edward Stokes of Calumet City, IL, and Traverse City, her parents, George Reynolds Hedges and Josephine (Carver) Hedges of Chicago and Traverse City, and siblings, Joan Olson and William Hedges. Buff is survived by her husband Maurice Witteveen, children Patricia (Steve) Olender of Webster, NY, Thomas Stokes of Traverse City. Bill (Peg) Stokes of Midland, MI, and Nancy (Robert) Brick of Traverse City. Buff, aka "Dinda", was particularly close to her 8 grandchildren, 5 great grandchildren and many other loving extended family members and friends. A 1943 graduate of DePauw University in Greencastle, IN, Buff married her college sweetheart, Dr. G Edward Stokes under one condition: that after Medical School was done, they would live in Traverse City, MI. After a post graduate stint at Indianapolis and his military service as a Captain in the Medical Corp at West Point, NY during the Korean War, the family moved to Traverse City where Buff had spent her summers as a little girl. They raised their four children in the Cherry Capital area to love life and to serve others. In 1959 she competed for and won the Mrs. Michigan pageant in Detroit. With the support of Traverse City and Michigan, she made an exciting run, all televised, with an eventual win of the title of Mrs. America. She loved entertaining, interior design and homemaking. She also loved and supported all of the arts, particularly music. Because of her intense interests in the arts, all of her children excelled as singers, actors, performers, directors, costumers, teachers, composers and designers. Buff was a member of the Suttons Bay Congregational Church, a former president of the Tri-County Medical Auxiliary, a member and secretary of Zonta, and a member of the Kappa Alpha Theta Sorority at DePauw University and she served for years on multiple committee’s for the National Cherry Festival. She was very proud to have served in this community that she loved so much. Artful, gentle, graceful, elegant, a true friend to all, with an easy smile and a mischievous sense of humor, she was a true iconic motherly guide and a faithful friend. A memorial service celebrating Buff’s life will be held on November 6, 2014. 3:00 pm at the First Congregational Church in Traverse City located at 6105 Center Rd. Following the service a reception is being planned. Memorial contributions may be directed to the Old Town Playhouse, 148 E. Eighth Street, Traverse City, MI 49684. Please sign Buff’s online guestbook at www.reynold-jonkhoff.com

Elizabeth &#8220;Buff&#8221; Hedges Stokes Witteveen, aka "Dinda" to her grandchildren, peacefully passed from this life to the next on Sunday, September 21, 2014 at the Grand Traverse Pavilions. It has been a privilege for our family and her... View Obituary & Service Information

The family of Elizabeth "Buff" Hedges Stokes Witteveen created this Life Tributes page to make it easy to share your memories.

Elizabeth “Buff” Hedges Stokes Witteveen, aka &quot;Dinda&quot; to her...