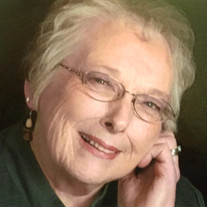 Elizabeth A. Hughes TRAVERSE CITY – Elizabeth A. Hughes, age 82, of Cedar, passed away on Sunday, October 14, 2018 at the Orchard Creek Assisted Living Facility in the loving care of her family. Elizabeth was born in Muskegon, MI on November 28, 1935 to Clarence and June (Dykema) Knoll. Elizabeth grew up in Muskegon and graduated from Muskegon High School in January 1953. After graduation, Elizabeth went to work for Bell Electric in Muskegon. In 1961 Elizabeth moved to Milwaukee where she met her husband of 56 years, Gordon and in 1962 the two were married. In 1971 Elizabeth and Gordon moved to Cedar where Elizabeth went to work as the Registar for the Leland Probate Court. Elizabeth was also the regional director for the Easter Seals of Traverse City. After the Easter Seals closed, Elizabeth and her daughter Deborah, co-founded and started a non-profit organization, Northern Michigan Helping Hands, which was a continuation of care for those with disabilities. She served as director up until the time of her death. Elizabeth was nothing short of generous and was always encouraging others to lend a helping hand; she was a generous community benefactor. She was an active member of Bayview Wesleyan Church, and also served on the board of directors for The Salvation Army of Traverse City. She loved to crotchet, travel, and loved spending time with her family. Elizabeth is survived by her husband, Gordon, children; Deborah (Donald) Roth, Traverse City, Jeffrey (Lisa) Hughes, Chambersburg, PA, and William (Robyn) Hughes, Kalamazoo. Elizabeth is also survived by her 6 granddaughters, 3 grandsons, and her uncle, Robert (Emma) Knoll. Elizabeth was preceded in death by her parents. A memorial service for Elizabeth will be held at 11:00 am on Friday, October 19, 2018 at the Bayview Wesleyan Church with a visitation one hour prior to the service. Pastor Vera Pascoe will officiate. A luncheon will be held immediately following the service. The family asks that memorial contributions be directed to Bayview Wesleyan Church, 720 Wayne Street, Traverse City, MI 49684 or The Salvation Army Traverse City, 1239 Barlow Street, Traverse City, MI 49686.

Elizabeth A. Hughes TRAVERSE CITY &#8211; Elizabeth A. Hughes, age 82, of Cedar, passed away on Sunday, October 14, 2018 at the Orchard Creek Assisted Living Facility in the loving care of her family. Elizabeth was born in Muskegon, MI on November... View Obituary & Service Information

The family of Elizabeth A. Hughes created this Life Tributes page to make it easy to share your memories.