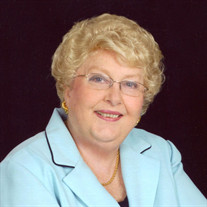 Elizabeth (Betty) Lewis passed away peacefully on January 24, 2018 at Grand Traverse Pavilions where she had been a resident since November. It was her 83rd birthday. She is survived by her husband John, whom she married in 1962; children Kathleen Franklin (Michael) of Traverse City, MI; Elizabeth Blondia (Joseph) of Maple City, MI; and a stepson Tim Lewis (June) of Marshall, MI. Surviving grandchildren are Kyle (Broek) and Sarah Lewis, Matthew, Isaac, and Daniel Franklin, and Kathleen (Kate) and James (Jamie) Blondia. Also surviving are two great-grandsons, Karson and Jase Lewis. She is preceded in death by her parents Bryan and Ida (Beukema) Beebe, a sister E. Lou Fairchild, and a daughter, Mary Elizabeth Lewis. As a young person growing up in Muskegon, MI, she immersed herself in music as a violin player, an activity she pursued throughout most of her life. Majoring in strings education, she was a Phi Beta Kappa graduate of the University of Michigan. While at the U of M, she was a member of Sigma Alpha Iota, Alpha Lambda Delta and Pi Kappa Lambda. A highlight of her college career was a summer at Tanglewood in an orchestra directed by Leonard Bernstein. She also received an MA degree in Counseling from Michigan State University and a K-8 teaching certificate from Western Michigan University. Her working career as a teacher took her first to Battle Creek, MI then for over thirty years to Marshall, MI. In her years in that area, she taught instrumental music, orchestra and 6th grade, and played in the Kalamazoo, Battle Creek, and Jackson symphonies and in college orchestras at Olivet and Albion. She was also an active member of the Marshall Civic Players and Trinity Episcopal Church. Retiring to Traverse City in 1993, she played in the Traverse Symphony Orchestra and became an active participant in many of the ministries of Grace Episcopal Church especially outreach, office volunteer and choir. Her interest in music and theater led her and John to many trips to Stratford, Ontario for the Shakespeare Festival. Other hobbies included reading, cooking, attending concerts at Interlochen where she had been a camper and staff member, and traveling with her husband. A special delight was spending time with her children and grandchildren who were the source of much joy and happiness in her life. Her earthly journey ended, she would like to share this thought. I was blessed throughout life by God, loving family and caring friends. Thank you for all the time we shared. Remember that we pass through this world but once. Any good that can be done for others, do it now, for you shall not pass this way again. God’s peace bless you now and forever. Visitaiton will take place Friday Frebruary 2, 2018 at the Grace Episcopal Church from 4-6pm. A memorial service celebrating Betty's life will be held on Saturday February 3, 2018 at 11:00AM at Grace Episcopal church, with visitation and greetings one hour prior. Memorial contributions in her honor may be directed to Grace Episcopal Church or to the Interlochen Center for the Arts. Please visit www.reynolds-jonkhoff.com to share your memories and condolences with the family. The family is being cared for and served by the Reynolds Jonkhoff Funeral Home and Cremation Services.

Elizabeth (Betty) Lewis passed away peacefully on January 24, 2018 at Grand Traverse Pavilions where she had been a resident since November. It was her 83rd birthday. She is survived by her husband John, whom she married in 1962; children Kathleen... View Obituary & Service Information

The family of Elizabeth Jo Lewis created this Life Tributes page to make it easy to share your memories.