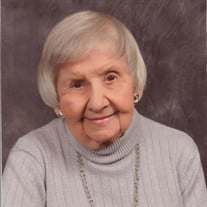 Elizabeth entered the world on November 19, 1916 in Shepherdsville, Kentucky, the fifth of six children born to parents John R. and Elizabeth Baker Sanders. From early childhood “Liz” was immersed in music, playing in the 1920’s with her family’s performing orchestra and in the 30’s joining her sisters as the “Sanders’ Sisters” vocal trio which sand on radio station WHAS in Kentucky. Liz was attending Georgetown College in Georgetown, Kentucky when she met Richard Griffith Bannister, whom she married on March 5, 1942, beginning a lasting marriage of 69 years until his death in 2011. Early in their marriage the Bannisters moved north to help with the war effort, settling in the Detroit area. They began their family and moved to Huntington Woods, welcoming daughters Beth (1947), Sally (1953) and Susan (1955). As a mom, Liz engaged creatively with her children and encouraged their love of learning. Liz loved children, and while raising her own, she began giving private piano lessons in her home. Following a transfer to the Pittsburgh area in 1957, the family returned in 1962 to Birmingham, Michigan. Always a learner herself, Liz became active in the Orff-Schulwerk music education community, learning approaches in teaching music to children, and travelling to conventions. She carried her knowledge into teaching in private and public schools, where her interest in sharing her love of music flourished. Age never deterred Liz’s aspirations, and in her sixties she enrolled in Oakland University in Rochester, Michigan to complete her Music Education degree, fulfilling a life long dream and graduating cum laude. After her husband Dick retired from Rockwell International, the Bannisters relocated to northern Michigan, building a home in Maple City and reveling in the beauty of Leelanau County. They made many friends at Glen Lake Community Church, and Liz taught music at the Leelanau School. Some years later, Liz and Dick moved to Traverse City, where they affiliated with the First Congregational Church and enjoyed the Port of Old Mission condo community. Along the way, Liz discovered and joined the Grand Traverse Musicale, a dynamic local organization which promotes music appreciation both by presenting local music talent, and by offering competitive scholarships to area high school students pursuing musical studies. Liz was delighted to serve several seasons as Program Chairman with the Musicale, and loved the friendships and musical activities she shared there. Many people most remember Liz for her Sunday afternoon piano "concerts" at the Traverse Area District Library, which began when the Woodmere location opened, and continued weekly for many years. Liz loved to bring the expression of beautiful music to others, and enjoyed the friendships she made with many listeners and TADL staff. At age 88, inspired and encouraged by friends, she recorded her first studio CD, "Musing on the 88 at 88", and proceeded to create three more CDs in the next six years, concluding with a selection of Christmas arrangements. She chose to donate revenues from the CD sales to the Library and the Grand Traverse Musicale. Liz's enthusiasm and creative artistry were not limited to music. She loved nature and delighted in the beauty of trees, flowers, cones and seed pods, from which she created a variety of unique objects of art and holiday decor. She was also intrigued by and skilled with words, enjoying challenging word puzzles and three times winning the local "Senior Spelling Bee" with her teammates. Liz’s life as greatly enriched by the many friendships she enjoyed throughout her years, and her family is deeply appreciative of the special friends who maintained contact with her as she aged, never losing interested in her well-being. She was preceded in death by her husband Richard, her nephew Tim Bannister, her five siblings and her parents John and Margaret Sanders. Surviving are her daughters Beth, of Traverse City, Sally (Mike) Piotrowski of Vienna, Virginia, Susan (Ichiro) Yamaura of Tochigi, Japan; grandsons David (Megan) Piotrowski and their daughter Reagan Elizabeth of Arlington, Virginia and grandsons Daniel Piotrowski of Baltimore, Maryland and Shigeru (Kayoko) of Tokyo, Japan; niece Janie Bean and her brothers David (Jane) and Jack (Marcia) Sanders, and other distant relatives. The memorial service will be held on Thursday, September 16, 2021 at 1:00 pm at the First Congregational Church on Center Road in Traverse City. Memorial contributions in her honor may be directed to the Grand Traverse Musicale (P.O. Box 31, Williamsburg, MI 49690) or to the Traverse Area District Library. Please visit www.reynolds-jonkhoff.com to share your memories with the family.

Elizabeth entered the world on November 19, 1916 in Shepherdsville, Kentucky, the fifth of six children born to parents John R. and Elizabeth Baker Sanders. From early childhood &#8220;Liz&#8221; was immersed in music, playing in the 1920&#8217;s... View Obituary & Service Information

The family of Elizabeth "Liz" Sanders Bannister created this Life Tributes page to make it easy to share your memories.

Elizabeth entered the world on November 19, 1916 in Shepherdsville,...