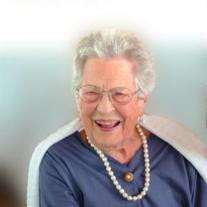 Elizabeth Eugenia (Woodhams) Parker died June 24 surrounded by her husband, Kenneth; her sister, Nancy; and her children, Marilyn, Nancy, and Robert. Betty was born in Hillsdale, Michigan on Sept. 21, 1913, to E. Eugene and Mildred (Washburn) Woodhams. Her brother, Robert Woodhams, was born in 1915 in North Dakota. Because the parents were teachers and musicians, their work moved them frequently around the country. Eugene also served in the YMCA Entertainment packages in France during World War I. Betty and brother Bob spent many vacation periods at the Litchfield, MI farm home of their grandparents, Robert and Clara Washburn, as well as another year or two during difficult financial and war times. When the parents separated in 1920, Mildred, Betty and Bob moved to Ann Arbor, MI, where mother Mildred supported them for about four years by teaching music in the public schools (supervised by Joseph Maddy, founder of the Interlochen Arts Academy) as well as giving private piano and violin lessons. When her mother remarried, to Robert Warman, in 1926, the family moved to Buffalo, NY, where Betty continued her education by attending three high schools in the area in the following three years. Sister Nancy (Warman) Pilhcrantz was born in 1927. Betty was valedictorian of her high school graduating class in 1931. Graduating from the University of Michigan in 1935, Betty taught high school English and Latin in Litchfield, MI and in Gladwin MI for two years before marrying Kenneth Parker in 1937, son of the superintendent of schools in Gladwin. After Ken returned from military service in Europe during World War II, he and Betty and daughter Marilyn moved to northern Michigan, eventually landing in Bellaire, MI where Ken started a weekly newspaper, The Antrim County News. He later acquired the Mancelona Herald. The family lived in Bellaire from 1947 to 1958, where Nancy and Robert were born. Seeking educational opportunities for their children, Ken and Betty moved to Traverse City in 1958, where Marilyn started 10th grade and Nancy began Kindergarten. Robert stayed at home with Grandma Mildred, who had come to live with the family at the same time. Besides being a wonderful wife to Ken, and mother to Marilyn, Nancy and Robert, Betty was a creative cook and vigorous gardener. She was a strong community leader all her life. After teaching English for 18 years in the Traverse City Public Schools, she blossomed into an active community volunteer upon her retirement in 1976. She became active with the League of Women Voters and it was during her presidency that a committee was formed focused on improving library services in the area. After many years of devoted effort, she provided leadership for the establishment of the Traverse Area District Library on Woodmere Ave. It celebrated its 10th anniversary in 2010. Betty was also active within the First Congregational Church, and was instrumental, inspired by Rev. Burt Erickson, then the Interim Minister, in establishing the Garden of Remembrance on the Church’s grounds. It has become a beautiful and quiet place to inter the ashes of cremated persons. The Garden has been in existence over 25 years and remains a wonderful place for spiritual contemplation. When Betty’s mother spent time at the end of her life in various nursing homes, Betty became a founding member of the local chapter of Citizens for Better Care, advocating for the inclusion of nursing home residents and their families in decisions regarding their care. She was also active in the local Area Agency on Aging. Her passion for classical music made her active in the early days of the Northwest Symphony Orchestra, now the Traverse Symphony Orchestra. She served on its Board for many years, and helped bring professional leadership to the orchestra. During college Betty joined the sorority Pi Beta Phi, and was active in their various activities in Traverse City. She and husband Ken supported the Civic Players, Ken with singing and acting, and Betty with directing one production. After their retirements, Ken and Betty traveled extensively in Europe, mostly through Elder Hostel. They also visited friends made through Betty’s summer study at Oxford University in England, and the family of French exchange student Chris Chabbal who lived with the Parkers for the school year of 1972-73. They also visited the family Grbovic, with whom son Robert lived as an exchange student the summer of 1972. After her volunteer activities came to their conclusions, she continued to participate with close friends in a reading group. She and Ken moved into an assisted living apartment at Traverse Manor in 2007, where they made many new friends. Betty also loved to welcome people into their home, always curious about the opinions and ideas of others, and supportive of their goals in life. Ken, her sister, her children and grandchildren and extended family and her many friends will miss her loving and sometimes challenging support. She dared us all to have high goals and to be our best selves. She is survived by her husband Kenneth, daughters Marilyn (Timothy) Mast, Nancy (Peter) Read and son Robert (Suzanne) Parker, sister Nancy Pihlcrantz along with grandchildren, Scott and Ashley Mast, Ben and Alex Read and Philip, Kevin and Charlie Parker A Memorial Service will be held Wednesday, August 15, at 2:00 pm at the First Congregational Church in Traverse City, Michigan. Memorial gifts may be made to public radio station WIAA. By mail: Interlochen Public Radio, 9350 Lyon Street, Interlochen, MI 49643-0199, or online at ipr:interlochen.org/ipr-make-gift-online.

The family of Elizabeth Eugenia "Betty" Parker created this Life Tributes page to make it easy to share your memories.