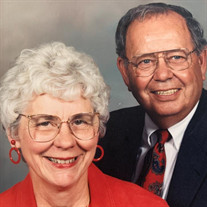 Traverse City – Luella Jean Tupper, 87, passed away January 28, 2021 at Northport Highlands in Northport, Mich. Wallace Leal Tupper, 87, passed away February 4, 2021 at Munson Medical Center in Traverse City, Mich. After 64 years of marriage, they are now together at the big classic car show in the sky with the top down and their hair blowing in the wind. Elly was born on December 28, 1933 in Cheboygan County, Mich. to the late Ralph W. and S. Hilda (Barr) Short. Wally was born on December 1, 1933 in Sturgis, Mich. to the late Jerald Leal and Helen Grace (Sanders) Tupper. Elly earned a B.A. in Home Economics from Albion College and an M.A. in Education from Western Michigan University. While at Albion, Elly and Wally met after being set up on a blind date. Shortly after they met, Wally enlisted in the U.S. Army, in which he served honorably. While assigned to duty in Europe, Wally played on several Army sports teams, most notably playing basketball, including several exhibition games against the Harlem Globetrotters. The teams had great respect for each other and played two games privately away from the exhibition crowds. They split that series 1-1. While apart Wally and Elly wrote love letters to each other every day. Following his time in the service, Wally graduated from Argubright Business College in Battle Creek. On February 2, 1957 Wally and Elly’s love story officially began as they united in marriage in Battle Creek, Michigan. Their love was one to be admired and could easily be made into a Hollywood movie. Throughout their life they always cherished each other. Elly was a devoted teacher for many years. In her free time, she was a history buff and enjoyed sewing and quilting. All of her grandchildren were blessed with beautiful quilts when they were born. Wally and Elly both enjoyed listening to music and attending classic car shows. They collected several classic cars, all of which were Fords and bright red, Elly’s favorite color. They were also longtime members of Central United Methodist Church in Traverse City, Mich. Wally was the president of Old Kent Bank in Hillsdale, Mich. for many years. In his spare time, he enjoyed playing golf. They are survived by their children, Stephen (Mary) Tupper of Bloomfield Hills, Mich. David (Kristy) Tupper of Traverse City, Mich., and Kathryn “Kathy” (Scott) Sommerfield of Traverse City, Mich.; Elly’s brother Dr. John (Mary) Short of Portsmouth, R.I.; Wally’s sister Pam (Dennis) Reed; and grandchildren Nicholas Tupper, Eleanor Tupper, Jessalin Tupper, Karinda Tupper, Wallace Tupper II, Reed Tupper, Alex Sommerfield and Stephen Sommerfield. Memorial contributions may be directed to the Albion College Annual Fund. https://www.albion.edu/giving/albion-college-fund

The family of Elly and Wally Tupper created this Life Tributes page to make it easy to share your memories.