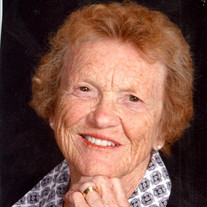 TRAVERSE CITY – Emily Jean Wilson, age 89, of Traverse City, passed away Monday, August 10, 2020 at Medilodge of Leelanau with family at her side. Emily was born January 18, 1931 in Northport, MI to Donald and Erma (Roy) Dalzell. Emily was a graduate of Northport Public Schools and Central Michigan University with a degree in Elementary Education. She taught 5th Grade in several school districts throughout Michigan. On August 18, 1962 she married Howard Dunlap Wilson at Bethany Lutheran Church in Northport, Mi. They started their home first in Jackson, MI and then moved to Marquette where they raised their family for 33 years before moving back to Traverse City in 1997. Once they started their family in 1964 Emily became a stay at home mom until the mid 1970's when she started working for the National Opinion Research Center as first an interviewer and then an area manager, which took her to many of the big cities of the U.S. In the 1980's she decided the travel was too much and became a Realtor for Century 21 in Marquette where she worked until retirement. Emily was a member of PEO and Bethlehem Lutheran Church where she was very involved in both. For many years she belonged to several bridge clubs as well as a church reading club. Golf and music were her other great passions. Emily is survived by her daughters, Janet (Tom) Denton of Traverse City and Sally Wilson of Marquette; son, David Wilson of Midland; two brothers, Allan (Joanne) Dalzell and Kenneth (Diane) Dalzell, both of Leelanau County; granddaughters, Sarah and Meghan Denton of Traverse City; and many nieces and nephews. She was preceded in death by her parents, husband, Howard, and brother and sister-in-law, Donald (Donna) Dalzell. A memorial service for Emily will take place at 3:00 pm on Monday, August 17, 2020 in the garden at Reynolds-Jonkhoff Funeral Home where a visitation will be held one hour prior to the service. Emily will be laid to rest next to her husband at Oakwood Cemetery on Tuesday August 18, 2020, which would be there 58th wedding anniversary. Memorials can be designated to Michael's Place of Traverse City, 1212 Veterans Drive, Traverse City, MI 49684, Traverse Bay Children’s Advocacy Center of Traverse City, 2000 Chartwell Drive #3, Traverse City, MI 49696, or Bethlehem Lutheran Church of Traverse City, 1050 Peninsula Drive, Traverse City, MI 49686. The Reynolds-Jonkhoff Funeral Home and Cremation Services is serving the family.

TRAVERSE CITY &#8211; Emily Jean Wilson, age 89, of Traverse City, passed away Monday, August 10, 2020 at Medilodge of Leelanau with family at her side. Emily was born January 18, 1931 in Northport, MI to Donald and Erma (Roy) Dalzell. Emily... View Obituary & Service Information

The family of Emily Jean Wilson created this Life Tributes page to make it easy to share your memories.