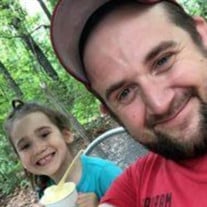 Eric Bedrick passed on August 26th, just two days after turning 31. On his way to work a horrific accident occurred and Eric received his wings. Eric Michael Bedrick was born on August 24, 1990 to parents, Dalynn and Eric, in Traverse City, MI. Eric attended schools in both Michigan and Florida, but received his diploma from Traverse City West High School. Eric valued family and friends! Spending time playing cards with Grandma Doris (Nelligan), watching TV/movies with his sister, Delaney Bedrick, a simple campfire in the backyard with his brother, Patrick Bedrick and cousins Alic, Celest and LJ were special times. A few keepsake times will carry on as “Family at Little River”, “Sleepovers at the GT Resort” and “Camp week with Grandma Jo (Bedrick)” were opportunities to share with his kids and role model how important family was. Eric’s special relationship with his maternal great grandparents, Albert and Dorothy Salisbury aided the decision to return to Michigan as a young man essential. He was thankful that he was able to spend time with them. Eric experienced quite a loss recently. His paternal grandfather, Robert (Bob) Bedrick passed in May of 2020. Then as recent as July, his uncle Jon (Nelligan). Jon’s bond with Eric, through the love for the outdoors and Michigan football bonded them tightly and made the passing extremely difficult. As a single dad, he never thought twice of the sacrifices he made to raise children. Whether they were his, or others. He treated them all the same and they came first. Always! He loved their innocence and laughter. He enjoyed taking them to the zoo, a park, even two-tracking and evening sunsets. He felt it was his job to make sure they knew beauty was everywhere. Aubrey, Easton and Adian and Aliyah will miss his thoughtfulness. Eric was a dedicated, hardworking and honest employee. Having a “jack of all trades” ability, from roofing, to household mover, to installer at Phillips Energy. Eric was an asset. He especially enjoyed his latest job as it came with the perks of working with his longtime friend, Chris Crampt. Eric leaves even more dearly loved family. His grandparents and “go to” people, Pat and Doris Nelligan. His Confidant and Aunt, Dorthia Nelligan, Uncles/Aunts - Walter (Norma) Edinger, Curt (Andrea) Bedrick and Carrie (Tom) Reardon. Plus numerous cousins. All of whom made his life richer and that of his children. Reynolds Jonkhoff Funeral Home will present the service to celebrate Eric on September 9th, at 11am. The family will be receiving guests starting as early as 10am and they welcome you to adorn Camo attire, as Eric often wore something camo himself. A special luncheon of Eric’s favorite Chinese foods and Cheesecake will follow the funeral at the Eagles, located at 409 W. 14th St., TC In lieu of flowers or plants, we ask that your memorial contributions be presented in the envelopes provided that will be directed to a Trust for the children that Eric loved so much. The family appreciates the work of the staff at Reynolds Jonkhoff Funeral Home and that of Creekside Crematory. A special “Thank You” to Lindsey Rogers for her sincere compassion for our loss.

The family of Eric Michael Bedrick created this Life Tributes page to make it easy to share your memories.