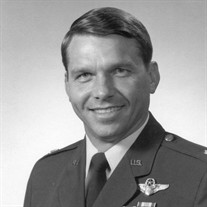 Lt. Col. Erik Lawrence Foged, 76, of Empire passed away peacefully with his family by his side on January 2, 2022. Erik was born on September 18, 1945 to the late Erik Woodrow and Eleanor Marie (Matney) Foged in Omaha, NE. On June 3, 1967 , Erik married his high school sweetheart, Barbara Kay Aylsworth in Papillion, NE. The two both came from military families. Together they traveled the world; shared many laughs and a lot of love over their 54 years of marriage. He enlisted on February 16, 1970 and proudly served for 23 years in the United States Air Force. While in the service he flew B-52's and fought for Peace. He was honorably discharged on February 28, 1993. Following his time in the service, he was a principal in Pellston, Buckley and Kingsley. Later in life he worked for the TSA. He was also active in the community and was a member of the Masonic Lodge, the Shriner's, the Lions Club and the Empire Township Planning Commission. Faith was important to Erik and he was a long time member of the Empire United Methodist Church. In his free time, Erik enjoyed woodworking, skiing, reading, music and going to Empire Beach. He will be remembered for his positive and optimistic outlook on life as well as his wonderful sense of humor and overwhelming generosity. He was very humble and despite his many accomplishments, never sought credit or recognition. Although, he was a proud graduate of the Clown College in Naples, Italy! He will be greatly missed by his family and friends. Erik was preceded in death by his parents; sister Eleanor Ann in infancy, brother-in-law Wayne Aylsworth and in-laws Warren and Aleta Aylsworth. Erik is survived by his wife Barb; daughter Erin Teubner; son Erik (Carroll "CiCi" Clough) Foged; grandchildren Charles, Lucy, Klara and their father Karl Teubner, and grandchildren Eli and Rowan; Aunt Gerda who was his honorary sister; Aunt Dorothy; brother-in-law Alonzo (Deb) Aylsworth; sister-in-law Sue (Bob) Palmer; brother Christian (Shelby) Foged; step-sister Laura Brewer; step-brother George Swaim; as well as many nieces and nephews. The funeral service will be held on Thursday, January 6, 2022 at 11:00 am with visitation beginning at 10:00 am at the Empire United Methodist Church. He will receive masonic rites and full military honors from the US Air Force and the VFW Honor Guard. Memorial Contributions in his honor may be directed to the Children's Program at the Empire United Methodist Church. Burial will take place at a later date at the family plot at Maple Grove Cemetery in Empire.

Lt. Col. Erik Lawrence Foged, 76, of Empire passed away peacefully with his family by his side on January 2, 2022. Erik was born on September 18, 1945 to the late Erik Woodrow and Eleanor Marie (Matney) Foged in Omaha, NE. On June 3, 1967... View Obituary & Service Information

The family of Erik Lawrence Foged created this Life Tributes page to make it easy to share your memories.