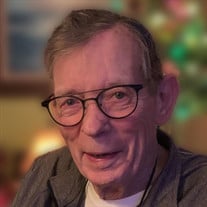 Erik Olaf Furseth, 91, of Traverse City, passed away February 28, 2022. He was born October 2, 1930 in Cleveland, Ohio, to parents Olaf and Aslaug Furseth. Erik was extremely proud of his Norwegian ancestry. When Erik was six years old his family lived in Norway for six months. When he returned to his elementary school in Cleveland he refused to speak anything but Norwegian. His parents were told that he had to repeat first grade and speak in English. Humble about his athletic talent, he claims that the extra year in school was a blessing. He earned the Outstanding Athlete Award his senior year, at age 19. Erik received a full scholarship to play football at Michigan State College. After an injury, he forfeited his scholarship. However, the scholarship was reinstated after he was accepted as a “walk on” to the MSC basketball team. He was proud to have been coached by the legendary Pete Newell. Erik was team captain his senior year. In 1951 Erik played in the Spartans’ first Big Ten game. (That game that was played in a high school gymnasium!) Erik’s favorite college summer job was as a deckhand on the SS McFarland. He learned to sleep through anything after asking the loading crew if they could drop the ore in a quieter way. The captain said, “Erik if you’re tired enough you can sleep through anything.” After college, Erik fulfilled his ROTC commitment and served in the Air Force as an air traffic controller. He returned to the Lansing area after his service. He was a radio personality and eventually the WILS station manager. He enjoyed mentoring those who were interested in the broadcasting industry. On weekends, he hosted and “played records” at his young adult dances and teen hops at the Lansing Civic Center. Erik’s passion was Public Address Announcing. He, for many, will always be The Voice of the Spartans. His career spanned 50 years serving MSU football, basketball and an occasional hockey event. 1968 marked the year he began working the MHSAA boys basketball finals and football championships. He also did the baseball finals for a decade. Erik’s last MHSAA event was in 2018. And let’s not forget the St. Francis High School in Traverse City where Erik announced football and basketball for several years. Erik’s observation of this dear community was that “the kids look out for each other.” Service to community was highly respected and valued by Erik. After noticing an East Lansing police officer helping children at a school crossing, he called the department and asked why an officer was assigned that role. The answer was that they simply did not have enough volunteer crossing guards. So, for the safety of children, officers were assigned. Without hesitation, Erik signed up to be a volunteer. He served as a Trustee at Lansing Community College for 12 years. His service continued here in Traverse City as a volunteer at Munson Hospital as a patient escort. Erik particularly enjoyed “wheeling out” the new moms with their infants. Erik cherished the memories of his young family vacationing on Anna Maria Island, Florida and weekends at the cottage in Charlevoix. He credited Mary Ellen with running a “tight ship” and being a devoted mother. If Erik had any regrets in his 91 years of life, he said he wished he had worked less and spent more time with his young family. Erik’s first attempt at courtship with Lynn was short. A 26-year age difference according to Erik was “a hard sell.” Lynn agreed that her father wouldn’t buy it. Fifteen years later, as fate would have it, they met again. The age difference no longer mattered to either of them. After a trip to Puerto Rico and a rooftop wedding, Erik introduced Lynn as “my wife, my life.” They had 32 years together sharing an obsession for “just the right lighting” for a cozy feel to their home, rearranging the furniture, a fine wine, cruises (especially itineraries including Norway) spending time with the grandchildren and with their Lake George Trail family on Spider Lake. (As it turned out, Erik was an easy sell. He and Lynn’s dad were best of friends.) Erik loved to tell stories. He specifically requested that the following be shared with family, friends and fans alike: “Thanks for listening.” Erik is survived by his wife, Lynn Alford; children Gretchen (Terry) McNabb, Kristen Furseth, Erik (Sue) Furseth and Margit (Paul Onufer) Furseth; grandchildren Anna, Emme, Annette, Keenan, Holly, Ashley, Lynzie, Bergen and Jack; 4 great-grandchildren; former spouse Mary Ellen Jeffreys Furseth; brothers-in-law John (Kathy) Alford and Mark (Kathie) Alford; niece Susan Wigham and nephew David (Becky) Wigham; as well as other extended family and friends. He was preceded in death by his parents; sister Greta Wigham and father and mother in-law Ron (Berta) Alford. A celebration of Erik’s remarkable life will take place Monday, May 16, 3:00 PM, at Reynolds-Jonkhoff Funeral Home. Visitation will begin at 2:00 PM and continue until the time of service. A reception will be held at the Top of the Park, at the Park Place Hotel, following the service. Guests, in the true spirit of Erik, please feel free to wear a piece of attire or swag from your Alma Mater! Please consider memorial contributions in Erik’s name to Doctors without Borders or to the Michigan High School Athletic Association. We wish to offer our gratitude to the staff of Cherry Hill Haven as well as Hospice of Michigan, for their care and respect bestowed upon Erik and his family. Reynolds-Jonkhoff Funeral Home and Cremation Services is caring for Erik and his family. You may view his tribute page at www.reynolds-jonkhoff.com

Erik Olaf Furseth, 91, of Traverse City, passed away February 28, 2022. He was born October 2, 1930 in Cleveland, Ohio, to parents Olaf and Aslaug Furseth. Erik was extremely proud of his Norwegian ancestry. When Erik was six years old his... View Obituary & Service Information

The family of Erik Furseth created this Life Tributes page to make it easy to share your memories.