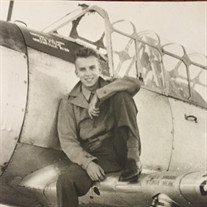 Traverse City - Ernest Albert Bacsanyi, 91, of Traverse City, Higgins Lake, and previously Northville, Michigan, passed away May 9, 2017 at home. Ernie was born on October 5, 1925 in Detroit to the late Geza and Margaret Bacsanyi. Ernie served our country honorably as a member of the United States Air Force. In January 1956 Ernie married the love of his life, Irene V. Szalay in Detroit. The two lovebirds and avid skiers honeymooned in Mont Tremblant in the province of Quebec, Canada. Ernie attended the Henry Ford Trade School and Wayne State University. He was a heavy truck engineer for the Ford Motor Company and retired after 30+ years. Married for 61 years, Ernie and Irene lived life to its fullest. Water skiers, sailors, scuba divers, and hikers, they loved the beauty of lakes and the majesty of mountains. They traded skis for snowboards on the slopes of the Colorado Rocky Mountains. John Denver's Rocky Mountain High and Take Me Home Country Roads often were heard around the house. Ernie was a member of the Experimental Aircraft Association and flew RC planes as well as piloted his own. They were regulars at the EAA AirAdventure in Oshkosh every summer, and loved to travel, especially back to their ancestry in Hungary. Ernie is survived by his wife, Irene; daughters Sandy (Dean) Coobac, Jessica (Creed) Tucker, Karla Bacsanyi, and Kerri (Dr. William) Comai; nine grandchildren Tim, Matt, Will, Taylor, Elliott, Annelise, Jackson, Margaret, and Alex; and brother, fellow pilot and snowboarder, Tom (Karen) Bacsanyi, and nephew T.J. Bacsanyi. Ernie's family and friends will celebrate his life privately. Ernie's passion for flying and sharing this interest with others, especially younger generations, was legendary. In lieu of flowers, contributions in his honor may be directed to the non-profit Roscommon Area Pilot Ass'n - EAA Chapter 1580, 5218 E. Houghton Lake Dr, Houghton Lake, MI 48629, attn: Chris Plainte. Donations will be directed toward the Chapter's EAA Young Eagles program. Founded in 1992, the Young Eagles has dedicated almost 25 years to giving youth ages 8 - 17 their first free ride in an airplane. It's the only program of its kind, with the sole mission to introduce and inspire the next generation in the world of aviation.

The family of Ernest Albert Bacsanyi created this Life Tributes page to make it easy to share your memories.