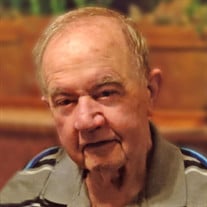 Ernest LeRoy Keech Sr., 86, of Williamsburg, passed away July 1, 2021, leaving behind his legacies of strong work ethic, respect to family and friends and putting your faith first. Ernest was born October 3, 1934 in Detroit, MI to the late Nathaniel and Mary (Robinson) Keech. He was one of 18 children. He now joins his siblings Leah, Elizabeth, Sarah, Mary Freida, Nathaniel Lee, Richard, Vera Louise, Gordon, Jack, Virginia, David, Howard, Pauline, Kenneth, Ilene and Robert. He leaves behind his sister Irene. Ernie married the love of his life on October 3, 1954, Nancy Ruth Davis in Matherton, Mi. They spent 66.5 years together laughing, loving and living. Together they have five children; Ernest LeRoy Jr., Tammie (Richard) Clous, Pennie (Damon) Davey, Russel (Sherri) Keech and Christopher (Denna) Keech. He was a man of many hats. He had a deep appreciation for his family and friends, he had a desire to please his Lord, he enjoyed working (officially retiring twice even), he loved to fish, kayak, play the guitar and enjoyed playing sports as well as watching his children and grandchildren play them. Ernie spent his professional life working and retiring from Supertool & Tower and was well known around the communtiy as the Sexton for Acme and Whitewater Townships for sixty plus years. In addition to his beautiful bride, five children and sister, Ernie leaves behind seven grandchildren; Randy (Sara) Davey, Sabrina Davey, Lisa Davey, Justin (Kaytlyn) Clous, Amber Clous, Sarah Keech, Lauren Keech and Nathan Keech, as well as great grandchildren; Brian, Alexxandria, Ashlyn, Luvena, Jordon, Ellie and Benjamin. A visitation will take place on Friday July 16th from 5-8pm at the Reynolds Jonkhoff Funeral Home. A funeral service will take place on Saturday July 17th at 2:00pm also at the funeral home with visitation from 1:00pm until the beginning of service. Ernie’s final resting place will be the Grand Traverse Memorial Gardens. Those wishing an expression of sympathy may wish to make a contribution to either the Lighthouse Church of God or to the family for expenses. Ernie and his family are being cared for by the Reynolds Jonkhoff Funeral Home.

Ernest LeRoy Keech Sr., 86, of Williamsburg, passed away July 1, 2021, leaving behind his legacies of strong work ethic, respect to family and friends and putting your faith first. Ernest was born October 3, 1934 in Detroit, MI to the late... View Obituary & Service Information

The family of Ernest "Ernie" Keech created this Life Tributes page to make it easy to share your memories.