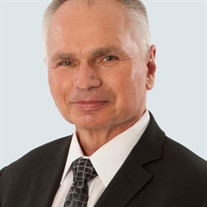 Ernest Charles (Stace) Stathakis, 69, crossed the finish line in his final race, into the arms of his Lord and Savior on March 8, 2021. He passed away peacefully at home surrounded by the love of his family and in the gentle care of Munson Hospice. Born in Monterey Park, California, on June 25, 1951, he moved with his family to Michigan at the age of 5, where the family eventually settled in Traverse City and purchased a restaurant they renamed Stacey’s. As the restaurant flourished, his nickname of Tosi (from his Greek name Anastasi) changed to Stacey. As a young boy, Stace spent most of his days playing Little League baseball or on the beaches of Clinch Park. At 13, he coached his little brother, sharing with him his baseball techniques and his love of sports. He graduated from Traverse City High School in 1969, where he met and later married Cathy Beagle on October 14, 1972, sharing a love that lasted a lifetime. Stace loved to run and enjoyed races with his daughters over the years and around the country. He was an avid golfer, and boxed as a young man, resuming it later in life with a personal trainer. He loved sports and was a lifelong Wolverines fan. He travelled extensively for business and pleasure, enjoying many adventures with his family. Love and laughter were his hallmarks. He leaves behind his wife Cathy of 48 years, daughters Amanda (Jeff) Parsons, of Raleigh, NC, Julia Stathakis (Brent Alpers) of Traverse City, Anastacia (John) Duber of New York City, grandchildren, Alainna and Aeden Pierce of Raleigh, Adam Pierce of Manistee, Landon Sweet of Raleigh, and his first great grandchild Alianna Pierce of Raleigh. He also is survived by his siblings Tina Partlo, Kaye Koffman, and Peter Stathakis, brothers-in-law Robert, Patrick, David, Jon, Joel, Nick Beagle and sister-in-law Pam Nickerson, along with numerous nieces and nephews, cousins, and friends. He was preceded in death by his parents, Charles and Julia Stathakis, his brother-in-law Christopher Beagle, infant nephew Chase, and nephew Brent Partlo. Stace loved his family passionately and his parting thoughts were to encourage all his family members to love one another forever. A private funeral service will be held at Gabriel the Archangel Greek Orthodox Church, with a celebration of his life planned for what would have been his 70th birthday in June. The family sincerely thanks Munson Hospice and Fr. Ciprian Streza for their physical and spiritual support. Stace requested that donations be made in his name to local organizations that benefit children; the family also requests donations to Munson Hospice, in lieu of flowers.

Ernest Charles (Stace) Stathakis, 69, crossed the finish line in his final race, into the arms of his Lord and Savior on March 8, 2021. He passed away peacefully at home surrounded by the love of his family and in the gentle care of Munson Hospice. Born... View Obituary & Service Information

The family of Ernest "Stace" Charles Stathakis created this Life Tributes page to make it easy to share your memories.