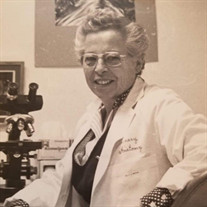 Esther Marie Brown, 98, of Williamsburg, went peacefully into the arms of Jesus on Wednesday, June 23, 2021. Esther was born May 12, 1923, in Highland Park Michigan to Mildred and Raymond Smith. The family soon moved to Birmingham Michigan where Esther spent her childhood. Most of her childhood stories revolved around playing and watching baseball with her father, or the domestic prowess of her mother to ensure the family never wanted for anything during the Great Depression. In 1941, as the United States was on the cusp of entering WWII, Esther entered Michigan State College where she went on to earn her Bachelor of Science, Masters and PhD degrees. With a PhD in Pathology from MSU, she became an Assistant Professor in Medical Biology – a program she successfully transitioned to the School of Medical Technology – where she Director. While teaching at Michigan State – she met her husband, Roger Brown, who at the time worked as a professor in the Veterinary Clinic. Several years after the two were married, they left MSU to teach at the University of Missouri. During their twenty year tenure in Missouri, Esther wrote a textbook on Veterinary Histology which was published in seven languages and is still in use today. Upon their retirement, they moved back to Michigan and purchased a home on Elk Lake where the two remained until their deaths. Esther is preceded in death by her beloved husband, her parents, sister Elizabeth Byers and her husband Richard, and her treasured niece Sally Byers Koch and husband Fred. She is survived by her great niece Kathryn “Katy” Brank and husband David and their children Charlie (6), Esther (4) and Elijah (1 month). Esther was a member of the First Presbyterian Church in Elk Rapids and enjoyed photography and sports – especially those of her beloved Michigan State Spartans, Go Green! Memorial services will be held at 11 am Thursday, August 5, with visitation one hour prior at Reynolds-Jonkhoff Funeral Home in Traverse City. Memorial donations can be made in Esther’s honor to her church, the First Presbyterian Church of Elk Rapids www.erfpc.org/giving/ or to the Dr. Esther M. Brown Endowment at Michigan State University. To make a donation to her MSU endowment, please make checks payable to: Michigan State University and note in the memo field “Esther Brown Endowment.” Mail your gift to: MSU College of Natural Science, 288 Farm Lane, Room 5, East Lansing, MI 48824; http://givingtomsu.edu/.

Esther Marie Brown, 98, of Williamsburg, went peacefully into the arms of Jesus on Wednesday, June 23, 2021. Esther was born May 12, 1923, in Highland Park Michigan to Mildred and Raymond Smith. The family soon moved to Birmingham Michigan... View Obituary & Service Information

The family of Esther Marie Brown created this Life Tributes page to make it easy to share your memories.