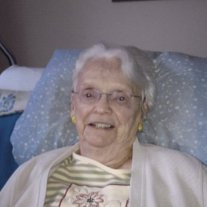 Traverse City - Esther Larson Willman passed away peacefully on June 14, 2013 at her daughter's home in Traverse City. It was a beautiful day with sunshine, blue sky, and West Grand Bay sparkling with diamonds. Born April 1, 1913 in Chicago, Ill to Swedish immigrants she had three brothers and sisters. Esther moved to Traverse City with her husband Dr. Wallace Willman in 1946 where he started his medical practice. Together they raised three children, all who now have returned to Traverse City. Dr. Donald Willman, his wife Karen and their daughter Lauren. Dr. Margaret Willman, husband David Foley who were the main care takers for mom. Lynne Moon and John Nelson, their daughters Christa and Peter Lortie of Atlanta, GA, Erica and Brian Mohr of Traverse City and Sonja and Bill Allen of Telluride, Co. Esther had six grandchildren Ella, Kali, and Avery Lortie of Atlanta, GA, Dillyn and Brady Mohr of Traverse City, and Parker West Allen of Telluride, CO. Esther also had two German exchange students Holger and Peter Friesel who lived with the family for a year each. Esther was very active in the League of Women Voters; she served two years as the president. She was also the vice president of the PTA for Central Grade School, president of the Osteopathic Women's Auxiliary and a member of the Great Book Club. In April 2013 Esther celebrated her 100th Birthday at the Traverse City Golf and Country Club. She entertained 75 friends that she laughed with and enjoyed her party. We will remember mom, grandma and great grandma as bright, well spoken, intellectually stimulating with a great sense of humor. She will always be remembered for her passion for reading, sometimes up to five books a week and usually falling asleep with one on her lap. She was a great advocate for getting all the education you could receive. Esther's love of travel took her around the world. She always told wonderful takes of meeting the people of the world. A heartfelt thank you from our family to Kathy and Joan for your love and care of our mother. We will all treasure the fact that you both cared so dearly for her. Our family will celebrate Esther's life in July and together laugh, cry, and remember the grand lady that Esther was.

The family of Esther Larson Willman created this Life Tributes page to make it easy to share your memories.