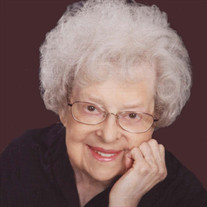 Obituary Eunice Henrietta Pines of Traverse City, formerly of Rogers City and Cleveland, Ohio went to be with her Lord on Wednesday October 28, 2015. She was 92 years old. The daughter of Esther (Cordes) and Arthur Krueger was born on June 17,... View Obituary & Service Information

The family of Eunice K. Pines created this Life Tributes page to make it easy to share your memories.