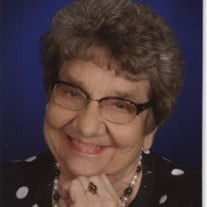 Evelyn (Drabek) Dugan of Traverse City died Sunday December 11, 2016. She was born in the family farmhouse near Hillhead, South Dakota on June 8, 1930 to Adolph and Mary (Najmajstr) Drabek. Evelyn was dedicated to taking care of those she loved her whole life and her passing leaves a gaping hole in the hearts of those who knew her. She graduated from Veblen (South Dakota) High School and went on to receive a Nursing degree from Barton School of Nursing in Watertown, South Dakota in 1951. She was very proud of being a nurse and enjoyed every minute of her career until she retired from active nursing after the birth of her second child in 1961. She kept her RN license current through the 70’s. On April 19, 1958 she married the love of her life, William (Bill) Dugan in Los Angelas, California. They lived in Long Beach California and had three children before moving to Detroit Michigan in 1965. A year and a half later they moved into a new house in Farmington Hills, Michigan three months before her fourth and last child was born. On February 10, 1974 the family was in a car accident that took the life of Evelyn’s husband, Bill and their 10-year-old son Kevin. Though critically injured and hospitalized for six weeks, Evelyn remained strong and helped her remaining children to heal and go on to live successful lives, supporting them in whatever they needed until her death. She never remarried. In 2001 Evelyn moved to Traverse City, where her three children had settled to be near them and her grandchildren. She took them on many family vacations, celebrated birthdays and holidays and attended all of their activities, the last one being her daughter’s bike race just a few weeks before her death. She was well known for her very vocal encouragement at her grandchildren’s sporting events. Over the years Evelyn has been involved in many activities, finding and giving joy in all of them. To name a few, square dancing, Red Hat Ladies, Al-Anon, line dancing, and always, her church. Wherever she went she was loved dearly. Evelyn is survived by her beloved sister Angie (Drabek) White, her children and their spouses, Kathy (Norm) Jones, Mike (Kristie) Dugan, Paul (Jane) Dugan, grandchildren Dave (Kate Smith) Engstrom, Amber (Mike) Dugan Stout, Jessica (Andy) Dugan Wichtoski, Lisa Dugan, Alex Brace and Catie Brace and one great-grandchild, Wyatt Wichtoski. Visitation will be at the Reynolds-Jonkhoff Funeral Home on Sunday, December 18, 2016 from 4-7 pm with a rosary service at 7:00 pm. A Mass of Christian Burial will be at St. Patrick’s Catholic Church on Monday, December 19, 2016 at 11:00 am with a visitation one hour prior. Memorial contributions may be made in Evelyn’s honor to the Father Fred Foundation, 826 Hastings Street, Traverse City, MI 49686.

Evelyn (Drabek) Dugan of Traverse City died Sunday December 11, 2016. She was born in the family farmhouse near Hillhead, South Dakota on June 8, 1930 to Adolph and Mary (Najmajstr) Drabek. Evelyn was dedicated to taking care of those she... View Obituary & Service Information

The family of Evelyn Rose Dugan created this Life Tributes page to make it easy to share your memories.