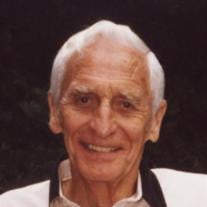 Traverse City-F. Keith Franks, 85, of Traverse City, died Sunday morning, October 21, 2012, at his home, surrounded by his loving family. Born May 16, 1927, in South Boardman, he was the son of the late Frederick and Vernice (Sexton) Franks. Keith was a honorably discharged veteran, who served his country with the United States Army, during WWII. While living in Lowell, he was employed by the Graybar Company in Grand Rapids . After moving to Traverse City, he worked as a manager for Medler Electric Company. He was a great supporter and excellent role model for his two sons. Keith received great pleasure in watching them participate in their chosen interest of baseball and softball. His favorite summertime hobby was golfing. Keith along with his wife, Ethel, enjoyed designing and making quilts. They also authored twenty children's books. His memory will be truly cherished through his gift of quilts and books to his grandchildren, great-grandchildren and friends. This private and unassuming man will be fondly remembered for his caring and loving ways. He is survived by his wife of 23 years, Ethel Franks; son, Ronald (Debra) Franks all of Traverse City; sister, Jean Elnick of Warren; Ethel's children, Gary Pittman of Wyoming, Vicki (Richard) Beck of Wyoming, Nancy (George) Evenocheck of Delton and William (Sheryl) Pittman of Lakeview; also eight grandchildren and seven great grandchildren and a host of dear friends. Keith was preceded in death by his son, Larry Franks who died in 2012 and his first wife, Betty (Christensen) Franks, who died in 1987. The Franks family will receive friends at the Reynolds-Jonkhoff Funeral Home on Wednesday, October 24, 2012, from 6:00 P.M. to 8:00 P.M. Funeral Services will be held at the funeral home on Thursday, October 25, 2012 at 11:00 A.M. Rev. Jeff Goodwin will officiate. Burial with military honors will follow at South Boardman Township Cemetery, South Boardman. In remembrance of Keith, memorials may be directed to Munson Hospice. Envelopes may be obtained at the funeral home. Kindly share your memories with the family on their online guest book at www.reynolds-jonkhoff.com Arrangements were made with the Reynolds-Jonkhoff Funeral Home and Cremation Services, 305 Sixth Street, Traverse City, MI 49684.

Traverse City-F. Keith Franks, 85, of Traverse City, died Sunday morning, October 21, 2012, at his home, surrounded by his loving family. Born May 16, 1927, in South Boardman, he was the son of the late Frederick and Vernice (Sexton) Franks. Keith... View Obituary & Service Information

The family of F. Keith Franks created this Life Tributes page to make it easy to share your memories.