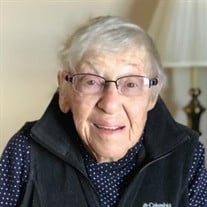 Fay Steinberger, 95, of Traverse City passed away September 10, 2020, peacefully surrounded by her four daughters. She was born in Detroit to Russian immigrant parents, the late Harry and Lena (Dictor) Berman. Fay was the youngest of three children, her brother, Frank, and sister, Esther, proceeded her in death. While Yiddish was the spoken language at home, Fay learned English when she began kindergarten. She was nicknamed Babe by her older brother, Frank, who let her tag along and left her with endless fond and loving memories. Fay attended Detroit’s Central High School where she spent fun days hanging out with a group of special friends. One in particular was Bill Steinberger, who caught her heart and kept it close during their 64 years of marriage. She and Bill were married on May 21, 1945 in her parents’ backyard when Bill was home on leave from the Navy. He preceded her in death in 2009. They settled in Detroit, where they raised their four daughters, close to their extended families. Family was at the core of their beliefs and the foundation of their love. Bill was an accountant for the City of Detroit, while Fay was the quintessential homemaker. Together they enjoyed the simple pleasures of life; summer camping in northern Michigan, big family dinners where Fay’s pie baking talents were enjoyed by all, and seasonal traditions like ice skating at Palmer Park, sledding at Rouge Park, and picnicking and swimming at Kensington Park. Fay had a way of making everyone feel welcome and special. After the children were grown, Fay worked outside the home in retail at JC Penney. There she used her people skills and enjoyed helping others. Upon retirement, Fay and Bill moved to Traverse City to live the “up north” life. They enjoyed being close to grandchildren, rarely missing any school, music or sporting event, even in the coldest of weather. Fay and Bill were members of Congregation Beth Shalom in Traverse City where they developed new connections and close ties to the community. Fay felt much “naches” (pride and joy) from her daughters, their husbands, grandchildren and great-grandchildren. Fay is survived by her daughters Susan (O. William) Brown of Bloomfield Township, Carol (Keith) Adler of Traverse City, Eileen (Donald Ross) Steinberger of Baltimore, Laura (Bob) Otwell of Traverse City; grandchildren, Rachel (Steven Meltser) Brown, David (Erica) Brown, John (Lauren) Ross, Emma (Nate Gilmore) Ross, Claire (Jesse) Karner, Annie (Maxim Kostylev) Otwell, Julia Otwell; great-grandchildren, Hannah, Avi, Judah, Noa, Eleanor, Wesley, Blaise, Dimitriy; and many beloved nieces and nephews. Fay was like sweet cream that rose to the top. She had an unending positive attitude, showed respect and kindness to all, and imparted cherished words of wisdom. We will keep her in our hearts always. Graveside services took place on Sunday, September 13, 2020 at Oakwood Cemetery. A celebration of Fay’s life will be held at a future date due to Covid-19 circumstances. Memorial contributions in her honor may be directed to the American Diabetes Association or a charity of one’s choice. The family was cared for by Reynolds Jonkhoff Funeral Home and Cremation Services.

Fay Steinberger, 95, of Traverse City passed away September 10, 2020, peacefully surrounded by her four daughters. She was born in Detroit to Russian immigrant parents, the late Harry and Lena (Dictor) Berman. Fay was the youngest of three children,... View Obituary & Service Information

The family of Fay Steinberger created this Life Tributes page to make it easy to share your memories.