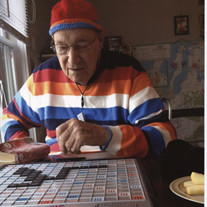 Ferdinand C. Fromholz, 97 of Traverse City, passed away at home surrounded by his family on April 26. He was born on the family farm in Garfield Township on November 1, 1916. Ferd, as he was known by all his friends and family, attended Traverse City High School and graduated in 1936. He was an outstanding member of the football team and was co-captain of the basketball team. He also played baseball and loved to fish, spending many days walking the surrounding area in search of a new fishing spot. In 1942, Ferd, along with his 2 oldest brothers, joined the military in service of their country; Ferd chose the Air Force and was stationed at Luke Field in Phoenix, AZ. He served as a corporal in the Med Corp and was honorably discharged after the war in 1945. Before joining the service, Ferd married the lovely, auburn-haired, Ann Mar in 1941 after meeting on the dance floor in Flint, Michigan. He stayed by her side until her death in 2006. They are survived by their three children, Linda Atwell, Lorrie Goss (Ken Goss), and Carl Fromholz (Lisa Grise) along with five grandsons, Alex, Lewis, Trent, Nicholas, Jacob, and one very spoiled granddaughter, Korie, and three great-grandchildren, Reese, Shea, and Paxton. He is also survived by two brothers, Gerald (Bud), and Donald (Don) and a sister, Dorothy Leach as well as many cousins, nieces and nephews in the Fromholz/McManus family. He was preceded in death by his two brothers, Cliff and George, Son-in-law, Randy, and grandson, Spencer. Ferd moved to Flint after graduating from High School to work as a truck driver and construction worker. He soon landed a job at General Motors, where he remained until his retirement in 1975. As many GM workers before him, Ferd moved immediately back to Traverse City and enjoyed 39 years of retirement in the home he built on Bunker Hill overlooking the bay, until moving in to spend his final years with Carl and Lisa. During his retirement years Ferd loved to fish, golf, play scrabble, and spend time with his grandkids. He is also widely known for his origami crafting of Ferd’s Flying Fish and colorful crocheted hats. The family would like to thank Munson Hospice for their kind care of Ferd in his final days at home and all the caring, heath-care professionals in and out of Ferds life. The family would especially like to thank his two, long-term caregivers, Jen Baller and Janet Pittelli, who Ferd loved dearly. They spent many hours with him as nurses, chefs, and scrabble companions. Visitation for Ferd will begin at 2 p.m. Tuesday, April 29 at the Reynolds-Jonkhoff Funeral Home followed by the funeral service at 3 p.m. with Scott Johnson facilitating the service. Following the service a gathering of family and friends will take place at the Country Hermitage B & B, 7710 U. S. 31 North, Williamsburg. For a more lasting memorial and rather than flowers, the family would appreciate Ferd being remembered through monetary contributions to Munson Hospice, c/o Munson Healthcare Regional Foundation, 1150 Medical Campus Dr., Traverse City, MI 49684 (www.munsonhealthcare.org/foundation) Please share your memories of Ferd with his family by way of his online guest book at www.reynolds-jonkhoff.com. The family is being served by Reynolds-Jonkhoff Funeral Home and Cremation Service.

Ferdinand C. Fromholz, 97 of Traverse City, passed away at home surrounded by his family on April 26. He was born on the family farm in Garfield Township on November 1, 1916. Ferd, as he was known by all his friends and family, attended Traverse... View Obituary & Service Information

The family of Ferdinand C. Fromholz created this Life Tributes page to make it easy to share your memories.

Ferdinand C. Fromholz, 97 of Traverse City, passed away at home...