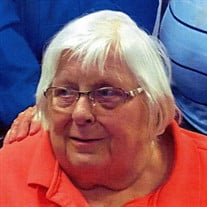 Fern Louise Chupp, 81, of Traverse City passed away July 2, 2016 at the Villa’s of Traverse Point surrounded by her loving family. Fern was born May 19, 1935 in Traverse City to Frank and Golda (Lalone) Sheer. She married Benjamin Chupp on July 20, 1957. Fern will be remembered for the unique way that she made those close to her feel special, as if you were the only person in the room. She had a wonderful sense of humor and enjoyed spending time with her family. She enjoyed fishing and camping with her husband and often recalled stories of her experiences, especially times spent at bear camp. She was a talented potter and owned her own kiln. Fern is survived by her step-daughters Linda Stewart of Traverse City, Bonnie Inman of Traverse City; sister Roberta Balch of Poplarville, MS; brother Frank Sheer of Novi; niece Beverly Slovinski of Traverse City; many nieces and nephews; 5 grandchildren, 12 great grandchildren and 2 great, great grandchildren. She was preceded in death by her husband Benjamin Chupp; parents Frank and Golda (Lalone) Sheer; sisters Pat Fisher, Grace Vandervort and Anice Newman; brothers Lawrence Sheer and Jack Sheer; step son Don Inman. A visitation will be held Saturday, June 9, 2016 at the Reynolds-Jonkhoff Funeral Home from 4 p.m. to 8 p.m. A funeral service will be held Sunday, July 10, 2016 at 11 a.m. at the Reynolds-Jonkhoff Funeral Home, with visitation beginning at 10 a.m. Pastor Bruce Sheets will officiate the service. Graveside services will be on Monday July 11, 2016 at 10 a.m. at Grand Traverse Memorial Gardens. Memorial contributions in Fern’s name can be made to the VFW Post #2780, c/o Women’s Auxilliary, 3400 Veterans Drive, Traverse City, MI 49684 or St. Jude’s Children’s Hospital, 262 Danny Thomas Place, Memphis, TN 38105.

Fern Louise Chupp, 81, of Traverse City passed away July 2, 2016 at the Villa&#8217;s of Traverse Point surrounded by her loving family. Fern was born May 19, 1935 in Traverse City to Frank and Golda (Lalone) Sheer. She married Benjamin Chupp... View Obituary & Service Information

The family of Fern Louise Chupp created this Life Tributes page to make it easy to share your memories.