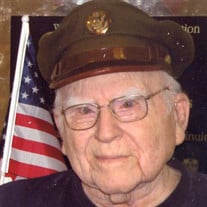 Mr. Ferris N. Glass of Traverse City, Michigan, age 101, passed away on Saturday, November 13, 2021. He has joined his beloved Carmel as they rest now together with their Lord and Savior. Ferris was born to Ralph and Irma (Sammons) Glass on January 15, 1920, in Mayfield, Michigan. As a child, Ferris grew up on Brown Bridge Pond and was very proud that his father had been one of the original Dam Keepers. His family were lifelong residents of the area, and always enjoyed a picnic or gathering at the site. Ferris had planted a tree there that can be visited today. Ferris proudly and courageously served his flag and country in the United States Army Air Force during World War II in the European Theater. During his service, he married the love of his life, Carmel Spencer on January 29, 1944, in Elizabeth City, North Carolina. It was then they began their family. Ferris was a faithful servant to the Lord and a dedicated member of East Bay Calvary Church. When time allowed, he loved to go camping, and would happily take on any task, fulfilling his affectionate title of “Mr. Fix-It.” Ferris is survived by his loving children Barbara (Robert) Miller, Douglass Glass, Robert (Susan) Glass; son-in-law Brian Smoyer; nine grandchildren; nine great-grandchildren; and numerous nieces, nephews, and other beloved members of the family. He was preceded in death by his parents; wife Carmel; daughter Rebecca Smoyer; and sisters Helen Bond, Hazel Lile, and Evelyn Platt. The funeral service for Ferris will be celebrated by Pastor Kendale Dennis at 11:00 a.m. on Saturday, November 20, 2021, at East Bay Calvary Church, 2225 Hammond Road E., Traverse City, MI 49686. Relatives and friends may call on the family during a time of visitation one hour prior to the service. Under the auspices of the United States Army and the Veteran’s Honor Guard, military honors will be rendered immediately following the service. Ferris will be laid to rest in Grand Traverse Memorial Gardens. Those wishing to offer an expression of sympathy are encourage to make a memorial contribution to East Bay Calvary Church.

Mr. Ferris N. Glass of Traverse City, Michigan, age 101, passed away on Saturday, November 13, 2021. He has joined his beloved Carmel as they rest now together with their Lord and Savior. Ferris was born to Ralph and Irma (Sammons) Glass on... View Obituary & Service Information

The family of Ferris Norman Glass created this Life Tributes page to make it easy to share your memories.