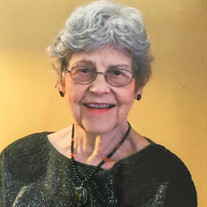 Flavia Jean Keegan, born Dec. 29, 1927, to Nellie and Flavius Kinney, passed peacefully the morning of April 3, 2021, at Medilodge of Leelanau in Suttons Bay, Michigan. Jean was a beloved mother, wife, grandmother, great grandmother, sister, aunt, friend and artist, and will be missed by all who were part of her life. Jean was born and raised in Detroit with one brother, Tom, and graduated from Cooley High School in 1946. Jean married John F. “Jack” Keegan in 1947 and raised five children - John “Jack” Jr., Colleen, Mark, Janice and Mary - in Southfield, MI. She and Jack Sr. moved to the cottage they built on Mullett Lake in Indian River, MI, in 1979. Jean was a gifted classical vocalist and was active in community choirs and performance art throughout her life. Before retiring, Jean worked for many years as a community mental health worker in both Detroit and in northern Michigan. Jean was also an accomplished oil paint artist; her paintings adorn the homes of many of her children, grandchildren and loved places. Jean loved to play Scrabble, read and listen to classical music. Before Jack Sr.’s passing in 2005, the couple enjoyed many years on the waters of Mullett Lake, swimming, traveling, riding motorcycles and spending time with family. Jean moved to Marquette in the 2000s, and to the Traverse City area in 2017. Jean was preceded in death by her parents, her brother, her youngest daughter, Mary Keegan Beadle, in 1993, and husband Jack Sr. in 2005. She is survived by son John “Jack” Jr. (Karen), Alberta, Canada; daughter Colleen Keegan Sudderth (Greg), Traverse City, MI; son Mark (Mary), Marquette, MI, daughter Janice Keegan (Dave Scroppo), Traverse City, MI; and son-in-law Joseph Beadle (Julie), Knoxville, TN. Jean is also survived by her 11 grandchildren, four great grandchildren, and numerous nieces and nephews. The family will have a private celebration of life at a later date. In lieu of flowers, friends are encouraged to make a donation to their local shelter or mental health/substance use organization in Jean’s honor.

The family of Flavia Jean Keegan created this Life Tributes page to make it easy to share your memories.