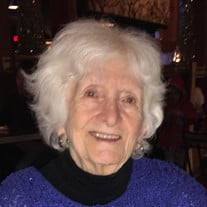 Florence Jones Traverse City, MI / Minnetonka, MN Florence (Gaboian) Jones, age 93, passed away peacefully on Thursday, February 13, 2020 surrounded by her loving daughters and sons-in-law, Sherri and Mike Du Mond of Edina, MN and Marilyn and Jan Vlach of Traverse City, MI. Florence was born in East Chicago, Indiana on December 13, 1926. Her 93 years were filled with experiences, and some difficult times, that demonstrated her strength and positive perspective on life that we will always reflect on and admire. Her parents Armen and Arakse (Kotcherian) Gaboian came to America following the Armenian Genocide, proud to integrate and be American citizens. With only Armenian spoken at home, Florence found herself needing to learn English in kindergarten. Then at a very young age, she and her younger brother, Walter, lost their father to cancer. Three years later, their mother Arakse met and married Eghiazar (Jack) Melikian who lovingly raised Florence and Walter as his own along with two additional siblings, sister Mary and brother Anthony. After high school, Florence earned an associates degree from University of Indiana business school and ventured on her own to Washington, D.C. to work and help with war efforts. She returned to the Chicago area to work at Mercy Hospital as a medical and surgical transcriber. On Sept. 3, 1949 she married the love of her life, Raymond H. Jones, Jr. and together they raised two daughters Sharon “Sherri” and Marilyn in the southwest suburbs of Chicago. After her girls were born, she became a homemaker and was very active in their schools as a room mother and in the PTA, serving as a volunteer at the Palos Community Hospital, as well as other school and community activities. She enjoyed dancing and music, going to the theater, and baking, especially her apple pies! As a couple, Flo and Ray spent weekends boating, loved playing bridge and pinochle, and always had the added commotion of dogs and an occasional cat in their home. As Ray’s career progressed, they moved to Greensboro, North Carolina for three years, and then to Minnetonka, Minnesota, where they lived until 1998. She and Ray were delighted to live in Minnesota and able to be an integral part of Sherri’s life and their grandchildren. In 1996, Florence sadly lost her husband of 47 years to lung cancer. At this time, she also began losing her vision to macular degeneration, although she did not let this slow her down. She bravely made the decision to make yet another move, this time to Traverse City, Michigan where Marilyn was living. Residing in this small community near downtown allowed her the ability to easily walk to shops, church, restaurants and other happenings with relative ease and maintain her independence even though her vision continued to decline. She was able to spend meaningful time with her grandchildren and great grandchildren. Florence will always be remembered for her sense of humor, her wit, her spunk. She persevered despite limitations, never letting it affect her outlook on life. Fiercely loyal to family and friends, and generous to a fault, she touched many lives and will always be remembered as our loving Mom, Grandma, and “GiGi”. She was preceded in death by her husband Raymond H. Jones, parents Armen and Arakse “Roxie” Gaboian, and Eghiazar (Jack) Melikian; brother and sister-in-law Walter and Jean Gaboian; sister Mary Hamady; brother-and-sister-in-law Verle and Charlotte Jones, and one nephew. She is survived by brother Anthony (Mary) Melikian; brother-in-law Richard Hamady; and by her two loving daughters, Sherri (Mike) Du Mond and Marilyn (Jan) Vlach along with 9 grandchildren: Lauren Dickerson, Andrew James, Curtis James, Allison Vlach, Kevin Vlach, Carolyn Vlach, John Du Mond, Jennie Noonan, and Joe Du Mond; 9 great grandchildren: Nolan, Claire, Evi, Zander, Ellie, Taya, Chloe, Ari and James as well as 5 nieces and 7 nephews. The family plans a Celebration of Life in May (location and details to follow) and suggests a donation to the Alzheimer’s Association (Alzheimer’s Association Minnesota-North Dakota 7900 West 78th Street, Suite 100, Minneapolis, MN, 55439 or https://www.alz.org/mnnd/donate) or the American Macular Degeneration Foundation (American Macular Degeneration Foundation, PO Box 515, Northampton, MA 01061 or https://www.macular.org/how-donate#memorial) for anyone wishing to make a memorial contribution.

The family of Florence "Flo" Jones created this Life Tributes page to make it easy to share your memories.