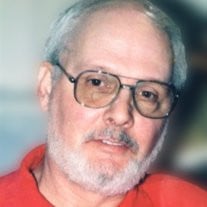 Ford Wynn Carter, 72, of Traverse City passed away on Friday, October 4, 2013 after a courageous battle with Cancer. Ford was born on April 27, 1941in Pontiac, Michigan to the late Royce and Alice (Lautner) Carter. He married Bonnie Lee Howard on September 4, 1965. Together they spent their 48 years of marriage in Traverse City. Ford honorably served in the United States Marine Corps during the Vietnam War. His last job was driving bus at BATA. He took early retirement due to work-related injury. He loved spending time with his family and playing cards. Ford was best known for his love of music. As a child the Carter kids sang on WTCM. In High School he was TC Central’s “Elvis”. Later he played with many groups including the “Carter Family Band” with his two sons. Ford is survived by his loving wife; Bonnie, two sons; Brian (Christine) Carter, Scott (Johanna) Carter, six grandchildren; Dillon, Brady, Isabella, Dominic, Isaac and AnnaMaria, two Step-grandchildren; Josh and Sara, three brothers; Royce, James (Gwyn), Michael (JoAnne), a sister; Connie (Tom) Rumbach and many other loving family members and friends, and his faithful canine companion, Bo. Ford was preceded in death by his parents and sister-in-law, Olivia Carter. The family would like to express their gratitude to the staff of the C4 West Wing of Munson Hospital. A memorial service honoring Ford will take place at 11:00 a.m. on Saturday, October 12, 2013 at the Reynolds-Jonkhoff Funeral Home, 305 Sixth St. Rev. Thomas Mansfield will officiate. Friends are welcome visit with the family on Saturday from 10:00 a.m. until the time of the service. Military Honors conducted under the auspices of Cherryland V.F.W. Post 2780. Those planning an expression of sympathy may consider memorials to First Baptist Church. Please feel free to Share your thoughts and memories with Ford’s family at www.reynolds-jonkhoff.com The family is being served by the Reynolds-Jonkhoff Funeral Home and Cremation Services.

Ford Wynn Carter, 72, of Traverse City passed away on Friday, October 4, 2013 after a courageous battle with Cancer. Ford was born on April 27, 1941in Pontiac, Michigan to the late Royce and Alice (Lautner) Carter. He married Bonnie Lee Howard... View Obituary & Service Information

The family of Ford Wynn Carter created this Life Tributes page to make it easy to share your memories.

Ford Wynn Carter, 72, of Traverse City passed away on Friday,...