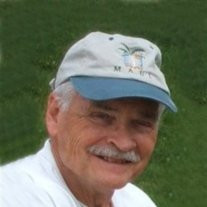 TRAVERSE CITY — Forest Byron “Frosty” Wortman, 83, of Traverse City, died early Friday afternoon, Aug. 30, 2013, at Orchard Creek Assisted Living. Born Dec. 16, 1929, in Fort Wayne, Ind., he was the son of the late F. Bryon and Alice (Deisler) Wortman. Forest graduated as valedictorian from high school in Defiance, Ohio, earned his bachelor’s and master’s degree at Purdue University, and was employed by Dow Chemical Company as a chemical engineer. A proud veteran, Forest also served his country with the United States Army during the Korean War. On Nov. 30, 1957 in Fairmont, Minn., he married his true love, the former Lina Charlotte Meyer, who preceded him in death in 2001. While living in Midland, he was a member of Trinity Lutheran Church. During their retirement years, the Wortman’s lived in Boyne City. In 2008, Forest moved to Traverse City to be closer to family and became a member of Advent Lutheran Church in Lake Ann. Frosty valued both hard work and play. He was an avid downhill skier, sailor and bicyclist--activities that he enjoyed together with family and friends throughout his life. He is survived by his children, Cheri (Keith) Huggett of Traverse City, F. Bradley Wortman of Traverse City, Steven Wortman of Cathedral City, Calif. and Daniel (Pam) Wortman of Frankenmuth; grandchildren, Audrey, Kyle, Brandon, Nathan and Stephanie; and his sister, Joan (Jerry) Riseling. In addition to his parents and wife, he was also preceded in death by a sister, Janis (John) Eberwine and daughter-in-law, Sandy. The Wortman Family will receive friends from 4 to 6 p.m., Friday, Sept. 6, 2013, at the Reynolds-Jonkhoff Funeral Home. Funeral Services will be held at 11 a.m., Saturday, Sept. 7, at the Reynolds-Jonkhoff Funeral Home, with visitation one hour prior to the service. Pastor Justin Grimm will officiate. Graveside services with burial will take place at 3 p.m., Saturday, at Maple Lawn Cemetery, Boyne City, with Military Honors under the auspice of the American Legion Post. Memorial contributions in his name may be directed to Hospice of Michigan, 900 E. Front St., Traverse City, MI 49686. Envelopes may be obtained at the funeral home. The family would also like to thank all of the staff at Orchard Creek and Dr. Thomas Auer for their wonderful care given to Forest. Kindly share your memoires with the family on their online guest book at www.reynolds-jonkhoff.com. Arrangements were made with the Reynolds-Jonkhoff Funeral Home and Cremation Services.

The family of Forest Byron Wortman created this Life Tributes page to make it easy to share your memories.