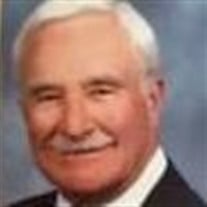 Frank John Alfonso TRAVERSE CITY – Frank John Alfonso, age 90, of Traverse City, passed away peacefully on Saturday, March 3, 2018 at Bay Ridge Assisted Living in the loving care of his family. Frank was born on August 18, 1927 in Ionia, MI to Vito and Constance (Chimienti) Alfonso. He graduated from Ionia High School where he was remembered for his pranks, fun and perpetual smiles. He was a trumpet player in the marching band and dance band as well as a Boy Scout and Alter boy. His love for flying started early as a member of the Air Scouts Squadron of Michigan. He was the first Scout to become a licensed student pilot at the age of 16. After high school, Frank enlisted in the United States Naval Aviation Cadet program and graduated from flight school in 1948. While serving in the Navy he was assigned to 7 aircraft carriers, he flew 8 different aircrafts and had a total of 116 aircraft carrier landings. He was a Navy flight instructor in Pensacola Florida for 2 years before being honorably discharged. Frank married Alice Marie (Ketchum) in 1949 and together they lovingly raised four children. Frank received his bachelor’s degree in Mechanical Engineering from Michigan State University. During his time at MSU he played trumpet in the MSU marching band. After graduation, he designed and built submarine equipment for submarines that patrolled the Atlantic Ocean. In 1967 Frank and Alice moved to Traverse City, where he founded Grand Traverse Machine, a manufacturing company with his brother. They specialized in auto, truck and automation robotic parts. Throughout the years Frank continued to be an avid private pilot. He and Alice loved playing golf together, and were members of the Traverse City Country Club. They enjoyed spending the winter months in Florida. Frank was known for his infectious sense of humor passing along that gift to his family. He was a member of the Elks Club in Traverse City as well as Immaculate Conception Church where he and Alice attended every Sunday Mass. Frank loved to rebuild and restore Mercedes Benz vehicles, and also built and flew model airplanes. He loved spending time with his family, and his family would routinely get together for pasta on Sundays. Frank is survived by his children; Susan (Bill) Heermann, Frank Jr. (Angela) Alfonso, Lee Ann (Bill) Leigh, and Linda (Roger) Stark. Frank is also survived by 7 grandchildren, and 1 great-grandchild. Frank was preceded in death by his parents, wife, his brother and sister. Per Frank’s request a grave site burial will take place and he will be laid to rest at Grand Traverse Memorial Gardens with a Veterans rifle salute.

The family of Frank John Alfonso created this Life Tributes page to make it easy to share your memories.