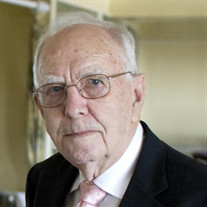 Frank Peter Buytaert, a resident of Traverse City since 2013, formerly from Ishpeming, Michigan passed away suddenly on May 4, 2016 at the age of 93. Born on September 29, 1922 in Loretto, Michigan, he was the eldest of four children and only son of Peter and Mary (nee Smith) Buytaert. Frank was raised in Loretto and was a 1940 graduate of Vulcan High School. In July of 1940 he entered the CCC’s (Civilian Conservation Corp) spending nine months at Camp 1620 near Gwinn, Michigan. He then moved to Ishpeming and worked as an automobile mechanic at Twin City Chevrolet. There he met and in 1943 married his wife of 73 years, Elizabeth (nee Wuorenmaa), who survives. In 1942 he began working as a mechanic and heavy equipment operator for Inland Steel Co. at the Morris Mine in North Lake. That career was interrupted by World War II and from 1942-1945 he was a member of the Army Air Force stationed in Austin, Texas. After an honorable discharge he returned to Inland Steel Co. in Ishpeming. Always an active volunteer and interested in education for his children, he served as a member of the Ishpeming Township Board of Education from 1951 to 1969 serving as President, Secretary and Treasurer. In 1963 at the age of 43 he enrolled as a student at Northern Michigan University, graduating after 3 years with High Honors in 1966. From 1966 to his retirement in 1984 he was employed as an Economics teacher at Ishpeming High School. After retirement he once again became an active volunteer preparing taxes for senior citizens for many years, serving on the Board of Ishpeming Senior Center, Ishpeming Public School Board of Education and Ishpeming Pioneer Kiwanis Club serving as President for all groups. Frank was an avid golfer, bridge player, traveler and enjoyed bird hunting and trout fishing. He was a skilled carpenter, mechanic and handyman able to build or fix anything and was always first to volunteer to help friends or family with their repair projects. In addition to his wife, Elizabeth, he is survived by two daughters: Cheryl (William) Todd of Marquette Ann ( Dr. Charles) Weitz of Traverse City. Four grandchildren: Allyson Todd( Nathan) Kemp of Green Bay, WI. Willy ( Terri Campbell) Todd of Marquette, MI. Dr. Joshua ( Dr. Lesley Loss) Weitz of Pittsford, NY. Dr. Leah Weitz ( Adam ) Carlson of Ann Arbor, MI. Great Grandchildren: Nolan Kemp and Preston Kemp Taylen Todd and Willow Todd William Robert Weitz and baby Weitz due in August 2016 Rory Carlson and Sean Carlson Frank was predeceased by his parents; and sisters, Florence Stachowiak, Margaret Buytaert and Betty Heilemann. Honoring Frank’s wishes cremation has taken place and a celebration of his life will take place at a later date. Please visit the Reynolds-Johnkoff Funeral Home website www.reynolds-johnkoff.com to share your thoughts and memories with the family. In Lieu of flowers, Memorial contributions may be directed to: Ishpeming Senior Center, 320 S. Pine Street, Ishpeming, MI.

Frank Peter Buytaert, a resident of Traverse City since 2013, formerly from Ishpeming, Michigan passed away suddenly on May 4, 2016 at the age of 93. Born on September 29, 1922 in Loretto, Michigan, he was the eldest of four children and only... View Obituary & Service Information

The family of Frank Peter Buytaert created this Life Tributes page to make it easy to share your memories.

Frank Peter Buytaert, a resident of Traverse City since 2013,...