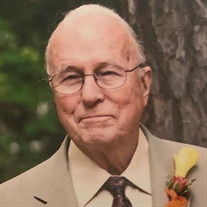 Frank W. Durham Jr. (96) of Chapel Hill, NC passed from this life on October 3, 2021 at Brookdale Assisted Living in Chapel Hill. Frank was born on July 1, 1925 in Cincinnati, OH. He graduated from Withrow High School (Cincinnati) in 1943, served in the US Navy from 1943-1945 and graduated from DePauw University in 1948. Frank, known as “Bull” to many close friends and family, married the love of his life, Shirley Gilbert, in 1947 and shared her passion for music. Frank was a member of several barbershop quartets – first in the Navy during WWII, then in college, and throughout his life with life-long college friends. His tenor voice was heard in musical plays in high school and college as well as church choirs in the communities where he and his family resided. These included Cincinnati, OH, Memphis, TN, Edina, MN, Hinsdale, IL, White Bear Lake, MN, Old Mission MI, and Chapel Hill, NC. Frank was a successful businessman spending over 35 years of his career with the H.B. Fuller Company. He started his career as a sales representative and retired as Vice President and Corporate Director of Marketing. In addition to his successful career, Frank was heavily involved in various churches and numerous philanthropic activities as a volunteer, board member, and in various leadership positions. These included Rotary International, where he was president of his local club (in both White Bear Lake, MN and Chapel Hill) and the Salvation Army where he served as chair of the advisory board in St. Paul, MN and as an advisory board member in NC. Seen by many as a generous, caring and kind man, Frank brought delight to all those whose lives he touched. Upon retirement, Frank and Shirley spent summers at their cottage in Old Mission, MI, a cherished place where they had vacationed with college friends since 1949 (with lots of singing!). His loving wife, Shirley, predeceased him after 73 years of marriage. He is survived by his three children: Thomas Durham (Judith) of Falmouth, MA, Nancy Durham (Bruce Fried) of Chapel Hill, and James Durham (Rebecca) of Wilmington, NC; eight grandchildren; and five great-grandchildren. The University Presbyterian Church in Chapel Hill will conduct a memorial service for friends and family in November. Internment will occur privately at the Peninsula Township Cemetery at Old Mission, MI. In lieu of flowers, donations can be made to The Salvation Army (www.salvationarmyusa.org).

The family of Frank W. Durham created this Life Tributes page to make it easy to share your memories.