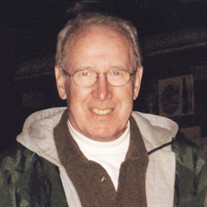 Frank Kenneth Majerle Photo / Flag Traverse City - Frank Kenneth Majerle passed away peacefully at Munson Hospice House in Traverse City on Monday morning, February 16, 2015. Frank (Sonny) and his twin sister Francis (Sis) were born at home in Cadillac to Frank Majerle Jr. and Helen (Miller) Majerle on July 7, 1939 and graduated from Cadillac High School with the class of 1957. Upon graduation Frank worked for a short while at Kraft Foods and St. John Table Factory in Cadillac before enlisting in the US Army where he subsequently was stationed in Germany. Following his honorable discharge, Frank studied and acquired the fine skill of barbering at the Detroit Barber College, served as apprenticeship, which was followed by a 32 year career during which he opened and operated Frank's Barber Shop in Traverse City. On June 8, 1963, Frank and Sallie (Lewis) were married at St. Ann's Church in Cadillac and from that union, they became the proud parents of three sons, Steve, Dan and Jeff. Frank and Sallie observed their 50th wedding anniversary in June 2013. For many years Frank enjoyed participating on local independent sports teams as well as the challenge of fishing and hunting. In his later years he could be found on any one of the many area golf courses. Family was most important to Frank as he and Sallie followed the various careers of their three sons and more recently their grandchildren. Surviving Frank in addition to Sallie are his three sons, Steve (Ruth) of Rockford; Dan of Phoenix, AZ, and Jeff of Chandler, AZ, as well as nine grandchildren; Ryan, Jessica, Jason, Sara, Madison, McKenzie, Mia, Max, and Mason Majerle; aunts Doris Majerle and Florence Majerle; brothers-in-law Harold Penny and Del McKinley; nieces and nephews Jim, Julie, Angie, Lisa, Tina, Marty and Michael as well as many cousins. Preceding Frank in death were his father and mother, Frank and Helen; sisters Mary Ann McKinley and Frances Penney; father and mother-in-law Maynard and Ruth Lewis as well as many other aunts and uncles. "Frank: I LOVED YOU ONCE, I LOVE YOU STILL - ALWAYS HAVE, ALWAYS WILL. ~ Sallie". Per Frank's wishes cremation will take place. The family will celebrate his life privately. The family is being served by Reynolds-Jonkhoff Funeral Home and Cremation Services.

The family of Frank Kenneth Majerle created this Life Tributes page to make it easy to share your memories.