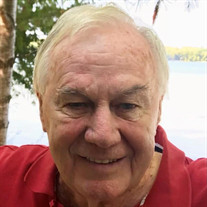 Frank Rosengren, 84, of Elk Rapids passed away peacefully at his Birch Lake home on November 24, 2021. His loving wife of 63 years, Joanne, was by his side. Frank was born on May 25, 1937 in Cadillac to the late Gordon and Ella (Grover) Rosengren. He is also preceded in death by his brother Dell (Karla) Rosengren. Frank earned his first degree from Central Michigan University in Business, and started a career at Firestone. During his brief time there, he realized the business world wasn’t for him. With Joanne’s support he decided to become a teacher; earning his teaching certificate from CMU while teaching at St. Andrew’s Catholic High School in Saginaw, Michigan. Upon completion of his certificate he began a long and rewarding career in education. He dedicated himself to the public school system. He taught Social Studies at Rodney B. Wilson High School in St. John’s, Michigan, where he was also the assistant football coach. In the summer of 1968 Frank and Joanne brought their family to Grand Rapids, Michigan. Frank taught Social Studies and was the varsity football coach at Forest Hills Central High School. He went on to earn his Master’s Degree in School Administration in the mid 1980’s and accepted a position as Assistant Principal and Athletic Director at Central Montcalm High School in Stanton, Michigan. He became Principal of that school in 1987. In 1992 he took his vast knowledge to Oconomowoc High School in Wisconsin as Principal, from which he eventually retired in 1994. Frank and Joanne moved back to their summer home on Birch Lake, where they have happily remained ever since. Frank was a charismatic man; his intelligence, confidence and charm always shone through. In addition, he was an exceptional athlete. The sum total of these traits gave him the skills to make his mark on the world. His approach to living life often made those around him uncomfortable, but he was able to inspire his friends and colleagues to set the bar higher for themselves. People in his circle always discovered strength and ability they never knew they had. He was an inspiration to others and had many personal accomplishments. In high school, Frank was an All State quarterback and co-captain of his varsity football team. He was also a member of a boys’ social club called The Dukes, where he made some lifelong friends. At Alma College he played shortstop and third base for the baseball team. Before teaching he was sent to a management training program through Firestone, as his leadership skills were recognized early on. He founded and moderated the International Relations Club at Forest Hills Central High School, where he took student groups to compete at Model United Nations conferences. His students won many awards over the years, for which he was very proud. He received the “Outstanding Teacher in Public Affairs” from the Southkent region of the Michigan Education Association. He was chosen from a group of 950 teachers. He co-founded and was Board President of The Institute For Global Education in Grand Rapids, Michigan. The IGE is a non-profit organization focusing on global thinking, peaceful conflict resolution and social justice. Frank co-authored a book called Internationalizing Your School: A Handbook and Resource for Teachers, Administrators, Parents and School Board Members, published in 1983. He introduced the Model United Nations program at Central Montcalm High School, and was instrumental in the development of an athletic complex. Parallel to his teaching career was a successful coaching career. He coached football and women’s track and field, and had several All Conference and All State athletes along the way. In addition to Frank’s passion for education, was also his passion for life itself. He was always interested in politics and was a lifelong activist and proud Democrat. He completed the Riverbank Run in Grand Rapids, Michigan. He swam across Birch Lake with his oldest daughter. He always listened to music, and even introduced his family to Reggae. He and his oldest son watched Jim Ryan break the half mile world record in Indiana, 1966. He used to make homemade french fries and ice cream on Christmas Eve; and speaking of ice cream, he insisted that if you eat it standing up there are no calories! He loved golf, and became a good golfer. He loved socializing with friends and watching Tiger baseball. Above all else, he loved and was very proud of his family. Joanne was absolutely the love of his life, and made sure she knew it. He loved the life he and Joanne created, and living on Birch Lake brought him a lot of joy. Frank is survived by his beloved wife Joanne; their children Brek (Patti) Rosengren, Paige (Andy) Zamarripa, Judsen Rosengren and Jamie (Shawn) Stowe; grandchildren Jenna, Allison and Sam Rosengren, Sophie and Paul Zamarripa, Eric, Abby and Danny Rosengren and Piper and Corbin Stowe, half-sister Susan (John) Lambouris and half-brother Bruce (Terry) Rosengren. The Rosengren family would like to recognize the lifelong friendships Frank had with Bob “The Krogs” Krogman and Doug Japinga. He thought the world of both of them. In his honor, memorial contributions may be directed to the Elk Rapids Community Cupboard, P.O. Box 572, Elk Rapids, MI 49629.

Frank Rosengren, 84, of Elk Rapids passed away peacefully at his Birch Lake home on November 24, 2021. His loving wife of 63 years, Joanne, was by his side. Frank was born on May 25, 1937 in Cadillac to the late Gordon and Ella (Grover) Rosengren.... View Obituary & Service Information

The family of Frank Rosengren created this Life Tributes page to make it easy to share your memories.

Frank Rosengren, 84, of Elk Rapids passed away peacefully at...