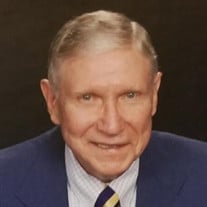 Lt. Frank Raymond Samborski, Ret. 77, of Traverse City and formerly of Detroit, died Monday, January 18, 2021 at Arbor House Assisted Living in Traverse City. Frank was born on Sunday, January 31, 1943 to the late Frank and Genevieve (Skrocki) Samborski in Dearborn. Following his graduation from Cathedral Central Catholic High School, Frank continued his education at Wayne State University, where he earned his bachelor's degree in criminal justice. A member of the Detroit police force, Frank worked his way up through the ranks, starting as a patrolman, moving to a detective, a sergeant and then retiring after 26 years with the department as an administrative lieutenant. After his retirement, he became security shift commander at The Grand Traverse Resort, a position he held for 15 years. He also had been named Security Officer of the Year by the Michigan Travel Bureau Association. Frank was an active member of Christ the King Catholic Parish in Acme, serving as an usher for many years. He was a 52-year member of the Knights of Columbus -4th Degree. Over the years he served as their warden, a trustee and treasurer and was director of the MI drive for seven years. Frank had received several awards from the Knights of Columbus, including Knight of the Month and Knight of the Year awards. Always one to be concerned for others, Frank volunteered his time in the Senior Companion Program with Catholic Human Services and also volunteered at the Grand Traverse Pavilions. He enjoyed bowling, playing softball, and sailing. Frank is survived by his wife Patricia Ann (Montagne) Samborski of Traverse City, whom he married on July 18, 1987 in Detroit; his children, Karen Marie (Jay) Roback of Adrian, Michael Francis (Tami) Samborski of Tecumseh, and Michelle Denise Samborski of Las Vegas, NV. Also surviving Frank are his step children, Ann Michelle Tilton of Hawaii and Thomas Michael (Marci) Milovich of Grand Blanc. He is also survived by his grandchildren, Katie, Maggie, Michael and Matthew, Aaron, Austin and Ashley. He was preceded in death by his parents. The Mass of Christian Burial will take place at 11 a.m., Monday, February 1 at Christ the King Catholic Church in Acme with Father Christopher Jarvis presiding. Visitation will begin at the church one hour prior to mass. Social distancing and mask protocol will be in place. The service will also be livestreamed and may be viewed by visiting www.christkingchurch.org and clicking on the link that says view mass. Interment will take place at St. Hedwig Catholic Cemetery in Detroit at a later date. For a more lasting memorial, you are asked to consider a contribution in Frank's name to The Knights of Columbus #9979 at Christ the King Catholic Church, P. O. Box 95, Acme, MI 49610 or to Catholic Human Services, Att: Senior Companion Program, 1832 Oak Hollow Drive Traverse City, MI 49686. Please share your memories and thoughts with Frank's family by visiting his online tribute page at www.reynolds-jonkhoff.com. The family is being cared for by Reynolds-Jonkhoff Funeral Home and Cremation Services.

The family of Frank Raymond Samborski created this Life Tributes page to make it easy to share your memories.