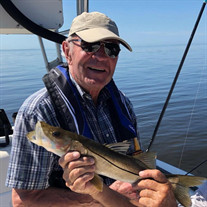 Frank Andrew Schollett, 83, passed away Monday, Feb. 15, 2021, in Traverse City. He leaves behind his loving wife, Jan; daughters, Lyn (Cindy) and Katy (Mike); son, Marc; daughter-in-law, Valerie; four grandchildren; and a lifetime of memories. An amateur accordionist, Frank grew up with his mom, Jayne Elizabeth (Adams), dad, Andrew Frank Schollett; and two brothers, splitting his time between Fort Wayne, Ind. and summers at the family cabin in Lewiston. His favorite childhood escapades always involved his brothers and the outdoors, hunting, fishing, swimming, and the occasional treed porcupine. Frank played football and basketball for North Side High School in Fort Wayne and was a member of the local DeMolay chapter, earning the highest degree awarded to an individual for performing unusual and meritorious service on behalf of the order, the Degree of Chevalier. In 1956, high school senior Frank became one of the first recipients of the Sertoma Award, considered Ft. Wayne's Heisman award, for outstanding academic and athletic achievements. Recipient of a full ride football scholarship, Frank played center for the University of Kentucky Wildcats, lettering three years. As a cadet in UK's ROTC, Frank was named most outstanding cadet out of 1,000 cadets at the 1959 summer training camp at Fort Knox. With the cadet rank of colonel his senior year, he was in charge of the entire drill program for all cadets in UK's ROTC program. Frank would tell you, though, the best thing to come out of his time at the University of Kentucky was meeting the love of his life, Jan. Upon graduation in 1960, Frank joined the U.S. Army, and in 1961, he and Jan were married. The newlyweds started their 59-year marriage by loading up their olive green colored Volvo Coupe and driving across the country to San Francisco where they boarded a military transport plane. With a combined 19 cents between them, Frank and Jan purchased and shared one military field ration MRE on the plane to Bangkok. Over the course of four years, as a member of the 82nd Airborne division, Frank served as a General's Aide at Fort Bragg in North Carolina and Thailand, and was honorably discharged with the rank of Captain. In 1964, Frank joined Eli Lilly & Company in Indianapolis as an Industrial Engineering Analyst. In his 32 years with Lilly, Frank worked his way around the world as a manager for distribution centers; director of manufacturing operations; director of compensation development and benefits; director of personnel and development; executive director of personnel resources and planning; executive vice president of international operations for Elizabeth Arden, a former subsidiary of Lilly; executive director and general manager of capsule operations and printing and finally, president and CEO of Shionogi Qualicaps. Frank retired at the age of 57. Retirement for Frank meant woodworking, gardening, and snowmobiling. Decked out in team colors and often the loudest fan in attendance, Papa cheered from the sidelines of football, volleyball, baseball, and basketball games. While winter months often meant walking a beach with Jan in Florida, Frank felt most comfortable in the north woods, at his hunting lodge, in a deer blind. Like much of everything in his life, part of what made the woods special was who he shared it with, his family and friends. To Frank, his family was the best thing in life and that came through time and time again. Frank Schollett's legacy is one of laughter and love. We will miss him dearly, but know while he may no longer be with us, he will always be in our hearts. And Papa, we're switching to channel...cinco. In lieu of donations, if you would like to honor Frank's memory, the Schollett family believes the best way is to reach out to a loved one, share stories, laugh, and create a memory to cherish because these are the things Frank treasured most of all. The family will celebrate Frank's life privately. Frank and his family are being cared for by the Reynolds Jonkhoff Funeral Home and Cremation Services.

The family of Frank Andrew Schollett created this Life Tributes page to make it easy to share your memories.