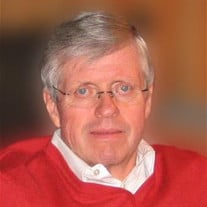 Frank Merritt Wheeler, age 74, of Traverse City passed away peacefully on August 14th at Munson Hospice House surrounded by the love and care of his family. Frank was born on January 3rd, 1945 to Barbara (Merritt) and Grant Wheeler in Kalamazoo, Michigan. He earned a BA in History from Ripon College, where he was a member of the SAE fraternity. After earning an MBA from Western Michigan University, he enjoyed a varied career in business finance in Chicago, Illinois, Milwaukee and Madison, Wisconsin, and Juneau, Alaska. Ultimately, his career led him to Traverse City where he and his wife Cheryl raised their two boys Dan and Jeff. Frank and his family spent many years enjoying travel, downhill and cross-country skiing as well as fun bike trips. He also treasured time with his family boating, water skiing, and relaxing at the cottage in Northern Wisconsin. His friends and family were always amazed by his photographic memory and incredible sense of humor. He had a natural curiosity and could often be found reading about history and following stock market and automobile trends. He was a Deacon at the Presbyterian Church, and in his retirement volunteered as a patient escort at Munson Medical Center. He was active in the Parkinson’s Support Group, served on the Parkinson’s Network North Board of Directors and the Munson Volunteer Board. Frank is survived by his wife of 46 years Cheryl (Geib), his sons Daniel (Peter) of Chicago, and Jeffrey of Chicago, brothers Grant (Nancy) of West Virginia, Kevin (Ann) of Michigan, and James of Michigan, and several nieces and nephews. He is preceded in death by his parents, Barbara and Grant Wheeler. A memorial service will be held at The Presbyterian Church of Traverse City at 11:00 A.M. on Tuesday, August 27th, with visitation at 10:00 A.M. and lunch following the service. Memorial contributions can be made to the Parkinson’s Foundation or the American Cancer Society. Frank and his family are being cared for by the Reynolds Jonkhoff Funeral Home and Cremation Services.

Frank Merritt Wheeler, age 74, of Traverse City passed away peacefully on August 14th at Munson Hospice House surrounded by the love and care of his family. Frank was born on January 3rd, 1945 to Barbara (Merritt) and Grant Wheeler in Kalamazoo,... View Obituary & Service Information

The family of Frank Wheeler created this Life Tributes page to make it easy to share your memories.