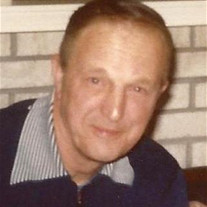 Frederick Lyle Dechow, 99, of Lake Leelanau, passed away in Shelby Township, Michigan on June 11, 2016. Fred was born in Northport, Michigan on June 11, 1917, the fifth child and first son of the late Judge Frederick A. Dechow and Maybelle (Lackie) Dechow. Frederick grew up on a cherry farm on the Leelanau Peninsula and would carry this love of tending a garden and harvesting a crop throughout his life. He graduated from Northport public schools in 1935. On July 4, 1936, Fred met Rose Bunek of Lake Leelanau at a local dance. They were married on Thanksgiving Day, November 23, 1939 in Lansing. Rose preceded him in death in 2002. They had five children and were married for 63 years. Frederick served his country in World War II in the Army Air Corps, where he repaired fighter planes, first in Saipan and then Okinawa. Fred was particularly proud that all five of the Dechow brothers served in WWII. There is a memorial plaque at the World War II museum in New Orleans to commemorate their service. After the war, he returned to Traverse City and for the next 18 years, he was the window clerk at the Traverse City Post Office. During this time he teamed-up with his wife to start Rug-O-Vator Cleaners, purchased six cottages on south Lake Leelanau that became the Leelanau Sandy Shores resort and through the years, fixed up and sold more than 20 homes in the Traverse City area. Because of his wife’s illness, Fred transferred to the Post Office in Santa Barbara in 1966, where he worked as a clerk, supervisor and station manager. After retiring from the Post Office in 1979, Fred and Rose returned to Michigan and built a home on a portion of the ancestral Bunek farm on Lake Leelanau. As snowbirds, they would winter in Palm Springs, California or visit Gulf Shores, Alabama. Fred was a founding member of the Federal Governmental Employees Credit Union (now 4front), an Elks member for more than 65 years and very active in the Lake Leelanau V.F.W. Post 7731, supporting numerous activities including honor guard for more than 200 veterans’ funerals. He celebrated his 99th birthday on June 4, with all his children present. He died peacefully one week later on June 11th, his 99th birthday. Preceding him in death are his parents and his five sisters: Clarissa Lauffer, Freda Mann, Voda Bourdo, Erma Bussey and baby Gwen; and four brothers: Veryl, Gerald, Claude and Clair. Surviving him are three daughters: Gilberta of Indianapolis, Indiana; Mary Ellen Meachum of Port Charlotte, Florida and Ann of Shelby Township and Lake Leelanau; two sons: Frederick John of Ava, Missouri and Edward of Carmel, Indiana; seven grandchildren: Walter Meachum, Jr., Kathryn Meachum Fleischmann, Frederick Andrew Dechow, Edward James Dechow II, Nicole Dechow, Krista Dechow and Eric Dechow; three great-grandchildren and numerous nieces and nephews. A Mass for Christian Burial will be held on Friday, July 15 at 10:00 a.m. at Saint Mary’s Lake Leelanau with Reverend Father Kenneth R. Stachnik officiating. A visitation and rosary will precede the Mass beginning at 9am. Burial after the Mass will be at St. Mary’s Cemetery, Lake Leelanau with a Celebration of Life luncheon to immediately follow at the church. Memorial donations can be made to St. Mary’s Lake Leelanau or the Carmelite Monastery, Traverse City or Veterans of Foreign War Post 7731, Lake Leelanau. Arrangements are being handled by the Reynolds-Jonkhoff Funeral Home, Traverse City. Kindly share thoughts and memories of Fred at www.reynolds-jonkhoff.com.

The family of Frederick Lyle Dechow created this Life Tributes page to make it easy to share your memories.

Frederick Lyle Dechow, 99, of Lake Leelanau, passed away in Shelby...