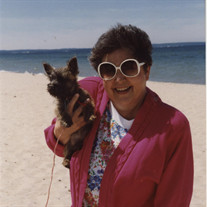 Gail Strong of Traverse City passed away peacefully in hospice on October 6, 2017, surrounded by her loved ones and many of her numerous friends. She was born on June 28, 1934 to David and Blanche Henry and is survived by her brother Jim of Medford, Oregon. Gail graduated from Redford High School in 1952 and married her high school sweetheart Charles Brown in 1954. Together Gail and Charlie had three children, Russell (known by many in the Traverse City area as “The Lawn King”), Craig, and Paula, also from the Grand Traverse area. She was enormously proud of Russell’s business and Paula’s career as a nurse. She traveled widely with Craig, from Venezuela to Paris, and with whom she shared a very close bond of friendship. She has one grandchild, Mira McLane, who she absolutely adored. In 1991 she remarried to Frank Strong who preceded her in death in 1996. Through Frank, Gail had two step grandchildren, Nick and Anna Strong. Gail worked for many years as a cosmetic salesperson, first at Pranges, then Younkers and finally at Hudsons. She loved her job both because she loved cosmetics and for all the contact she had with the public. She was a people person for sure. She loved doing the makeup of customers passing by, and she kept a stash of suckers to give to kids. Anyone who knew Gail was well aware of her two great passions in life: children (especially babies) and dogs. She was also preceded in death by her nine dogs, Toby, Holly, Penny, Christy, Ebby, Toto, Misha, Tyler and Tony. On her way to Heaven she stopped at the Rainbow Bridge where her dogs were waiting. It was certainly a joyful reunion. In Gail’s later years she went swimming at least twice a week at the Civic Center pool where she had lots of friends, some of whom she liked to play practical jokes on. Swimming kept her involved in the community and she felt a physical freedom in the water that she no longer had on land. Gail loved all people unconditionally and she was loved in return. When she was no longer able to get around easily she liked to imagine she was an angel who flew around sprinkling peaceful fairy dust on all the broken hearted people of the world. This was her special prayer to Jesus, Prince of Peace and Love. A Celebration of Life will take place at the Reynolds Jonkhoff Funeral Home on Friday October 13, 2017 at 11:00am with visitation one hour prior. In lieu of flowers memorial can be directed to the Cherryland Humane Society, 1750 Ahlberg Rd. Traverse City, Michigan, 49696 in Gail's honor. The family is being cared for by the Reynolds-Jonkhoff Funeral Home and Cremation Services. Please visit their website at www.reynolds-jonkhoff.com to share your thoughts and memories.

Gail Strong of Traverse City passed away peacefully in hospice on October 6, 2017, surrounded by her loved ones and many of her numerous friends. She was born on June 28, 1934 to David and Blanche Henry and is survived by her brother Jim of... View Obituary & Service Information

The family of Gail Joan Strong created this Life Tributes page to make it easy to share your memories.

Gail Strong of Traverse City passed away peacefully in hospice...