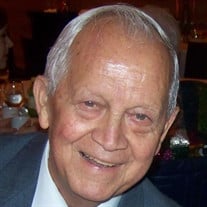 Gary Lee Brown was born in Traverse City, Michigan on September 27, 1929 to Fred and Mabel Brown. He was one of eight children and grew up in Traverse City. He graduated from Traverse City Central High School in 1947. He worked for his uncle Clinton Cox as a salesman and distribution driver. Gary joined the US Air Force in 1951 and married the love of his life Esther A. Graham on June 30, 1951. He served in Korea at the Kunsan Air Force Base until 1952. He then returned to Aberdeen Proving Grounds in Aberdeen, Maryland where Esther joined him. Their first child, Patti, was born in Maryland. Gary and his family returned to Traverse City later in 1953. Gary worked for his Uncle again before joining Consumers Power Company in May 1956. During Gary's very successful career with Consumers, he and his family moved six more times with each advancement he made in the company. Gary and Esther had three more children Judy, Sally and Dennis. Gary retired from Consumers in 1987. Gary and Esther enjoyed retirement life until Esther's untimely death in July 1994. Gary was fortunate to find a new life long partner and married Leila Tilton BIackmer in 1995. Leila had four children who were dear stepchildren to Gary. Leila preceded him in death in 2016. Gary was an active man who enjoyed golf, fishing, hunting and gardening. Gary had many friends and had a great love for children. He commonly would strike up a conversation with a little one no matter where he was at just to see a smile or hear a chuckle. . Gary is survived by his children Patti (Ron) Silverman, Judy (Mark) Baase, Sally (Geir) Friisoe, Dennis (Renae) Brown, William (Stephanie) Loomis, Sharon Loomis-Rice, Edward Loomis and Thomas Loomis. Gary also has eighteen grandchildren and twenty-three great grandchildren and he loved each one dearly. He began his life in heaven on March 4, 2022. Gary will be missed. A memorial service will be celebrated by Pastor Chris Lane at 11:00 a.m. at Central United Methodist Church, 222 Cass Street, Traverse City, MI. Relatives and friends may call on the family during a time of visitation one hour prior to the service. Immediately following the service, you are cordially invited to join the family for a time of fellowship, food, and refreshments. Under the auspices of the United States Air Force, Military Honors will be presented at 1:30 p.m. in Oakwood Cemetery. Those wishing to offer an expression of sympathy are encouraged to make a memorial contribution to the Children's Ministry at Central United Methodist Church.

Gary Lee Brown was born in Traverse City, Michigan on September 27, 1929 to Fred and Mabel Brown. He was one of eight children and grew up in Traverse City. He graduated from Traverse City Central High School in 1947. He worked for his uncle... View Obituary & Service Information

The family of Gary Lee Brown created this Life Tributes page to make it easy to share your memories.