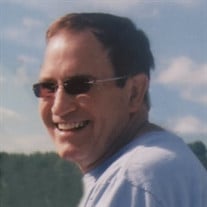 Traverse City - Gary Leon Popovits, 65 of Traverse City passed away July 14, 2014 at Munson Medical Center. Gary was born on January 16, 1949 in Flint to the late Leon Nicholas and Marial Belle (Hughes) Popovits. Gary married his soul mate and best friend Beverly Jo (Brandt) Popovits in Flint on August 14, 1971 and for forty-three (43) years they loved and supported each other. Gary was employed by the Flint Community Schools for thirty-two (32) years as both a maintenance supervisor and 3rd grade teacher. He was a dedicated, hard working, humble employee who was liked by all of his co-workers. Along the way he earned his Bachelors Degree from the University of Michigan - Flint and later his Masters Degree from Saginaw Valley State University in the area of special education. Following their retirement in 2005, Gary and Beverly moved to Traverse City in 2007 to be closer to their only child, Gary D. Popovits. In his retirement he spent lots of quality time with his family and many friends, taking particular pleasure in hosting those that chose to visit the beautiful Traverse City area that Gary loved living in and was always eager to show off. He was an absolutely amazing husband, father, father - in - law and grandfather that adored his grandchildren and the time he spent with them. Gary also enjoyed boating and was always ready to take anyone who was interested for a ride around East Bay. He was also was very generous with his time and always willing to help anyone who asked. His engaging smile and kind, encouraging personality, along with his sense of humor will be missed by all who knew him. Gary is survived by his loving wife Beverly of Traverse City, their son Gary D. and wife Danielle also of Traverse City, and grandchildren, Isaiah Matthew, Elliot August, Owen Nicholas, and Willa Emmeline. He is also survived by his paternal aunt Evelyn English of Oscoda, his brother - in - law Donald A. Brandt and family of Traverse City, as well as many special cousins and close friends. The funeral service will be held on Saturday, July 19, 2014 at 2:00 pm with visitation beginning at 12 noon at the Reynolds Jonkhoff Funeral Home, with a graveside service immediately following at the Peninsula Township Cemetery. Additionally there will be a gathering in Flint, Michigan on July 26, 2014 at 4:00 pm at the Flint Golf and Country Club to celebrate Gary's life so that Gary's "downstate" family and friends that cannot attend the funeral will have an opportunity to pay their respects. In lieu of flowers, contributions in memory of "Gary Leon Popovits" may be directed to Munson Manor. Munson Manor is a housing facility supported by donations that aides the families of patients at Munson Medical Center that are not local or may for other reasons need to stay close to their suffering loved ones, but provides them a more comfortable option than the hospital. While Gary's family did not need these services during his month long stay at Munson's Intensive Care Unit they witnessed first hand how the Munson Manor helped those families in need. Gary's family would also like to communicate their sincere appreciation and gratitude to the nurses at Munson's ICU, as well as Dr. Adrian Seah for the skilled and compassionate care they provided Gary and his family. Please visit www.reynolds-jonkhoff.com to share your thoughts and memories with the family. The family is being served by Reynolds Jonkhoff Funeral Home.

The family of Gary Leon Popovits created this Life Tributes page to make it easy to share your memories.