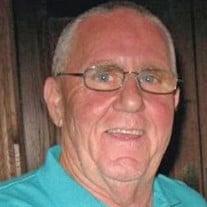 Gary D. Warren, 63, of Old Mission Peninsula, died peacefully at home in his wife’s arms after struggling with Alzheimer’s disease. Gary was born July 4, 1951, to Jean (Lamie) and Keith Warren. He married Wendy (Wilson) on Dec. 5, 1975, and together they raised six children. Gary was a role model to his kids and many others, including exchange students, daycare kids and friends who also called him Dad or Papa. A lifelong fruit farmer, Gary was passionate about agriculture and the farming community he called home. He was known for generously handing out bags of apples all over town. That generosity was one of the things that first drew Wendy to him — and something he instilled in all of his children. Gary gave back to his community as often as he could. For many years, he was on the volunteer fire department for Peninsula Township. He served for three years as a Grand Traverse County Sheriff Reserve; from there, he went on to serve as a Traverse City Police Department Reserve for 25 years, when he retired as captain in 2009. He also was a firearms instructor for the police department and participated on its competitive shooting team. Gary served on the board for Farmers Mutual Insurance in Traverse City and the board of the Northwest Michigan Horticulture Research Station. An avid hunter and a Life member of the NRA, Gary was equally at home in the woods as he was on his farm. He spent many hunting seasons in the Upper Peninsula with “the guys.” His family and friends will always remember him as being a great man who worked hard and never met a stranger. He was generous with his hugs, his laughs and his spearmint gum. And he did a mean Donald Duck impression. Gary is survived by his wife, Wendy; his children: Clint Warren of Traverse City; Toni Warren and Rick Bergey of Traverse City; Charity and Mark Sawyer of Kingsley; Jeremiah and Tanya Warren of Traverse City; Kimi and Bobby Baker of Grand Rapids; and JJ Warren of Kenosha, Wisconsin; his grandchildren: Malina, Charles, Joie, Dylan, Cullin, Sam, Levi, Zack, Tristin, Caleb, Gage and Sprout; and great-grandchildren Matthew and Kaylee; his mother, Jean Warren; his siblings: Mike and Linda Warren of Traverse City; Gloria Warren of Grand Rapids; and Lorrie Warren of Traverse City; many aunts, uncles, nieces, nephews and cousins; and countless friends, family and friends who were family. He was preceded in death by his father, Keith Warren; granddaughter Penelope Joy Baker; nephew Cory Wilson; and godson John Hoffman. At Gary’s request, no formal service will take place, but a gathering of family and friends will be held from 1 p.m. to 3 p.m., Tuesday, Oct. 28 in the fellowship hall at Old Mission Peninsula United Methodist Church (16426 Center Road, Traverse City, MI 49686). In lieu of flowers, memorial donations may be made in Gary’s name to the Alzheimer’s Association, Greater Michigan Chapter (25200 Telegraph Road Suite 100, Southfield MI 48033) or the Northwest Michigan Horticulture Research Station (6686 S. Center Highway, Traverse City MI 49684). Arrangements are being entrusted to the Reynolds Jonkhoff Funeral Home and Cremation Services in Traverse City.

The family of Gary David Warren created this Life Tributes page to make it easy to share your memories.