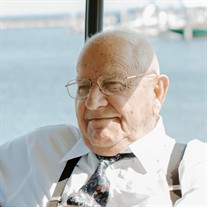 Eugene (Gene) Merle Coffey, 86, of Traverse City, passed away suddenly at his home on Wednesday, November 17, 2021. Gene was born in Allen Park, Michigan, the youngest of seven children of Roy and Beatrice Coffey. After his childhood, Gene started his plumbing career with Danboise Plumbing of the metro Detroit area. Gene served in the U.S. Army from 1958 through 1960, serving our country during peace time. In 1960, he married his childhood friend, Joyce Posavac and they started their long life together, having two children, Jill and Kevin, in the early 1960’s. In 1967, Gene moved his family to Traverse City, Michigan and started his own plumbing and heating company, Coffey’s Plumbing, which later became E-Z Plumbing and Heating, a family business. Gene’s passion was his family, which he loved to spend time being a loving husband, father, grand-father, and great-grandfather. Gene learned carpentry from his beloved father-in-law and self-taught himself many other trades. With his expert trade skills, he built both his houses one in Allen Park and one in Traverse City. He also used those trade skills to help friends and family repair and build their personal property, teaching the skills as he went, especially to his children and grandchildren. Gene was also an avid softball player and played on multiple teams well into his 70’s, followed by pickleball into his 80’s. His heart for service carried on during his retirement as he became very involved with volunteering with his Church, especially on their mission team. He joined multiple mission trips around the eastern half of the country, using his spiritual gifts to help rebuild people’s lives affected by tornadoes, hurricanes, and other nature disasters. He often drove his ramshackled 1994 Lincoln town car, named the green hornet, always believing that the car would make the trip with some tender loving care, Channellocks, and possibly a little duct tape. During his final years he enjoyed tinkering around the house, keeping his tractors running, visiting with neighbors, and playing games with his family. Gene is survived by his wife of 61 years, Joyce Ann Coffey (Posavac), daughter Jill, and son Kevin and his wife Theresa, siblings Lois and Bob, three grandsons, Brent and his wife Ashley, Tyler and his wife Natasha, and Blake. Gene was also blessed to have had a great grandson, Cooper and several step-grandchildren and step-great grandchildren. Gene was laid to rest at Memorial Gardens in a private family ceremony. In lieu of flowers donations can be made to the Presbyterian Church of Traverse City missions fund.

Eugene (Gene) Merle Coffey, 86, of Traverse City, passed away suddenly at his home on Wednesday, November 17, 2021. Gene was born in Allen Park, Michigan, the youngest of seven children of Roy and Beatrice Coffey. After his childhood, Gene... View Obituary & Service Information

The family of Gene Coffey created this Life Tributes page to make it easy to share your memories.