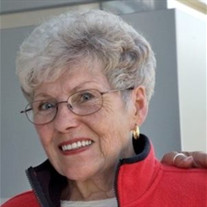 Genilee Oberpeul passed away at her home in Bellaire on Friday, July 11, 2014. Gen was born to Arthur and Doris (Raymond) Brackett on January 29, 1929 in Wayne, Michigan. In 1939 the family relocated to Traverse City. Genilee graduated from Traverse City High School in 1948. She met Edward Schuknecht, married and their family grew with the birth of children Rick, Ron, Patty and Peggy. The Schuknecht home on Pinecrest was a gathering place for teachers, neighbors and children, especially the Lockman family. When her marriage to Edward ended, she had a second chance at love by meeting a handsome widower, John Oberpeul, from Bellaire at a Parents Without Partners function. Along with John came his four children Rose, Joane, John and Ginna and the “farm” near Bellaire. Gen and John were married on June 25, 1977 and thoroughly enjoyed their 37 years of marriage with their blended family. Gen was a superior homemaker and her skills translated well when she entered the work force first as the “hostess with the mostest” at the Pinestead Reef and later at Bellaire State Bank. Gen was known for her baking skills, her salty and sweet bacon curls, the twinkle in her eye as she smiled broadly, and her warm welcoming spirit to all who entered her home. No hummingbird in the vicinity went without nectar while on Gen’s watch. More recently she became an avid Red Wings fan and rarely missed a game. She even cheered on the Lions. A voracious reader, a talented artist, a lover of Sinatra’s smooth tones, Genilee was a true Lady. Left to remember Gen are her husband, John and devoted dog Sadie, and children, Richard (Ann) Schuknecht of Ada, Ronald Schuknecht, Patricia (Ed) Schram, Peggy (Chuck) Ellibee all of Traverse City, Rose (Rick) Eichmueller of Duluth, MN, Joane (Bill) Fleet of Bellaire, John (Debra) Oberpeul of Brighton and Ginna (Dr. Jeff) Holmes of Alma. Grandchildren Shaunna (Jason), Jennifer (Brandon), Kristen (Travis), Nick, Charlie, Emily, Angela (Mike), Vivian (Krishanu), Richard, Erica (Nate), Rob, Aaron (Josie), Hillary, John Saul, Joshua, Chelsea, Leigh, and Nathaniel will miss their Grandmother. Gen was also blessed with 20 great grandchildren. An open house Celebration of Genilee’s life will be held on Saturday, July 26, 2014 from 3:00 to 5:00 p.m. at Reynolds Jonkhoff Funeral home in Traverse City. For those wishing to make a contribution in Genilee’s honor, please consider the Bellaire Community Food Pantry, 205 E. Broad St., Bellaire, MI 49615. Per Genilee’s wishes, she has been cremated. The family would like to sincerely thank Dr. S. Lee Warnaar for his genuine concern with her medical treatment; and Rod and Sheri Hart who have helped provide care for Gen and John for the past several years. The family is being served by Reynolds Jonkhoff Funeral Home and Cremation Services.

Genilee Oberpeul passed away at her home in Bellaire on Friday, July 11, 2014. Gen was born to Arthur and Doris (Raymond) Brackett on January 29, 1929 in Wayne, Michigan. In 1939 the family relocated to Traverse City. Genilee graduated... View Obituary & Service Information

The family of Genilee Oberpeul created this Life Tributes page to make it easy to share your memories.

Genilee Oberpeul passed away at her home in Bellaire on Friday,...