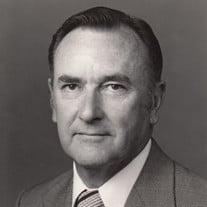 TRAVERSE CITY – George William “Bill” Brumbaugh, 89, of Traverse City, passed away on Thursday morning, May 21, 2015. Bill was born on December 27, 1925 in Sioux Falls, SD. to his parents Morris and Cara (Black) Brumbaugh. He served in the Air Force and earned his Bachelor’s degree in Music at Morningside College in Sioux City, Iowa, Masters and Doctorate degrees in Music Theory at Michigan State and University of Minnesota respectively. He also attended Episcopal Theological School in Cambridge, Massachusetts. Although his career took Bill and his family around the country to Indiana, Minnesota, New Mexico, Massachusetts, Arkansas, and Michigan, he was most happy in Traverse City where he was in close proximity to Interlochen Center for the Arts while still being able to live in the “north woods”. Bill is survived by his children, Stephen Brumbaugh (Katie), Elise Brumbaugh, Matthew Brumbaugh (Donna, and granddaughter Madison), and Jacob Brumbaugh (Camilla), as well as his first wife, Mary Brand, second wife Patricia Brumbaugh; also his sisters Helen Hanson (Wendell), Betty Lou Levene (David), Maurice Ness (JD). No services are planned, but those wishing to give a memorial could contribute to the Michael J. Fox Center for Parkinson’s Research, the American Cancer Society, or to the charity of their choice. The family is being served by Reynolds-Jonkhoff Funeral Home and Cremation Services.

The family of George William Brumbaugh created this Life Tributes page to make it easy to share your memories.