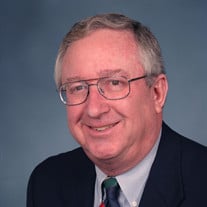 Glen Arbor - George Whitney Bulliss Jr., 79, of Glen Arbor and formerly of Grand Rapids, died Friday, July 12, 2019 at his home in Glen Arbor. George was born on Thursday, November 30, 1939 to the late George and Velma (Link) Bulliss in Grand Rapids. Following high school, he began his college education but had to leave early to run the family retail store, George Bulliss Men’s Store, which his father had started in 1941. Taking over the operation of the store in 1961, George would operate the business until it was sold in 1980. After moving north, George worked as a realtor for Peppler Realty, which later became Coldwell Bankers. George thoroughly enjoyed his work in real estate, his coworkers, and the people he met and chose to never fully retire from it. He married the love of his life, the former Jane Livingston, on February 4, 1961 and would spend 41 years together before Jane's death on June 29, 2002. George missed Jane terribly and was still so very much in love with her. Having spent summers up north for many years, George and Jane moved here permanently after the sale of the store. They enjoyed the Glen Arbor community and their annual trips to the Upper Peninsula. They especially cherished their home, from which they watched the weather, their “deer friends” and the seasons drift past the backdrop of the islands and dunes. Having family gather for dinner at home was a favorite event. Fondly remembered trips George took, one early in life and one later, were to Philmont Scout Ranch and a 17 day visit to Alaska. The west was always a favorite destination and between his hunting trips and tours of the National Parks he covered a lot of miles out there, enjoying both popular destinations and those off the beaten path. George is survived by his son George (Lauren) Bulliss III and daughter Katherine Anne (Tom) Axtell, all of Traverse City. His grandchildren, Samantha (Scott) Hansen of Traverse City and Owen and Anna Bulliss, also of Traverse City. Also surviving George is his sister, Marcia Barnhart of Grand Rapids. He was preceded in death by his wife, Jane; his parents and brother in law, Jim Livingston. A memorial service will take place at 11 a.m. Thursday, July 18 at Reynolds-Jonkhoff Funeral Home, with visitation one hour prior to the service. Memorial contributions may be directed to The Glen Lake Women's Club (which Jane was very involved in) The George and Jane Bulliss Memorial Fund, P. O. Box 412, Glen Arbor, MI 49636.

The family of George Whitney Bulliss Jr. created this Life Tributes page to make it easy to share your memories.