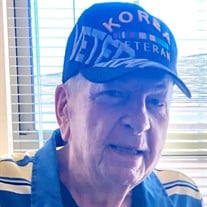 Traverse City- George Robert Crisman, 90, passed away surrounded by his loving family on Friday, September 10, 2021 at Bay Ridge Assisted Living. George was born on December 6, 1930 in Highland Park, MI to the late George and Myrtie (Wilcox) Crisman. George was raised alongside his sisters Kathleen and Dorothy. Honorably, George served our Country in the United States Airforce during the Korean War. After his time in the Service he became a Police Officer and retired as a detective with the City of Bloomfield Hills. On January 21, 1968, George married Beverly Ann Livingston. Together they celebrated 52 years of marriage before Bev’s passing in 2020. George was very social, active, and enjoyed volunteering his time. He was proudly involved in the VFW, a lifetime member of the Elks, volunteering at Central United Methodist Church, the Senior Center, and was on the Board of Directors for the Pavilions. Bev and George were always together in marriage and work. Together they owned and operated the Sail Inn Bar and several real estate ventures. In their travels across the USA, they managed an RV campground in Sedona, Arizona and worked as cast members for Walt Disney Theme Parks. George enjoyed camping and spending time with friends. Above all, George was devoted to his family and loved them dearly. George is forever loved by his children; son Jeff (Chrys) Livingston; daughter Marianne (Flip) Crisman-Fenno; grandsons Maxwell and Mason; and brother-in-law Keith Brogan. He is also survived by nieces and nephews and numerous friends. George is preceded in death by his parents George and Myrtie, and his sisters Kathleen and Dorothy. Those wishing to make a donation in George’s memory are asked to consider the Alzheimer’s Association. The family would like to thank the incredible staff at Bay Ridge for their love and care of George. Kindly share thoughts and memories with George’s family at www.reynolds-jonkhoff.com George’s family is being cared for by the Reynolds-Jonkhoff Funeral Home and Cremation Services.

The family of George Robert Crisman created this Life Tributes page to make it easy to share your memories.