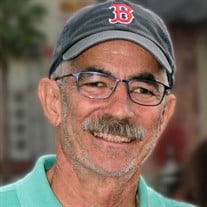 TRAVERSE CITY – George Kligman, age 67, of Traverse City, passed away Wednesday, October 31, 2018 surrounded by his loving family. George was born on October 24, 1951 in Detroit, MI where he was raised by his grandparents, Michael and Maryanne Gianakis. George grew up in the Detroit area where he graduated from Pershing High School. After high school, George worked at Wrigley’s Food Market. George then moved to Grayling where he owned and operated the restaurant Pizza Castle. After owning the restaurant, George went to work for Heath IGA as a manager; it was while working there that George met his wife, Diane. Together they made the move to Traverse City and were married on July 26, 1986. For most of his working career George worked as a Pharmacy Solutions Specialist in Traverse City, where he retired in 2016. In his retirement years, George went to work at Maxbauer’s meat market where he worked up until June 2018. George was also a youth soccer coach at the YMCA in Traverse City for 10 years. George was a Detroit Tigers fan at heart, and an avid sports memorabilia collector. If George wasn’t watching Indiana Jones or enjoying a good movie with his family you would often find him reading up on history, or working in his yard. Above all else, George was a family man, family meant everything to him. He loved spending time at the family cottage in Wolverine, fishing and kayaking. Family vacations were important to George as they often traveled to Niagara Falls or Disney World making the most of each and every day from the minute the park opened to when it closed, they always made the most of the time they had together. George is survived by his loving wife, Diane, devoted sons; Joseph (Kate Reed), and Steven (Summer West), and two cousins; Teddie and Ed, two brothers and mother-in-law, Dolores. George is also survived by many in-laws, nieces and nephews. George was preceded in death by his parents, grand-parents, father-in-law, and his dog, Pepper. A visitation for George will take place from 2:00 – 7:00 pm on Sunday, November 4, 2018 at the Reynolds-Jonkhoff Funeral Home with a praying of the rosary beginning at 6:30 pm. A Mass of Christian Burial will take place at 11:00 am on Monday, November 5, 2018 at Immaculate Conception Church with a visitation one hour prior. Father James Hayden will officiate. A luncheon will be held immediately following mass in the church fellowship hall. Following the luncheon there will be a procession to Grand Traverse Memorial Gardens where George will be laid to rest. Memorial contributions may be directed to the American Cancer Society, 525 W 14th Street Unit 5, Traverse City, MI 49684.

TRAVERSE CITY &#8211; George Kligman, age 67, of Traverse City, passed away Wednesday, October 31, 2018 surrounded by his loving family. George was born on October 24, 1951 in Detroit, MI where he was raised by his grandparents, Michael and... View Obituary & Service Information

The family of George Kligman created this Life Tributes page to make it easy to share your memories.