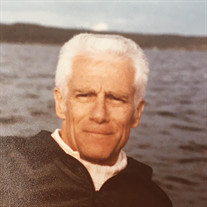 George R. Kuhn, of Traverse City, passed away peacefully on January 3, 2021. George was born in Detroit on July 17, 1932, to parents, Bernard and Phyllis Kuhn. In 1959, he married Elizabeth ("Betty") Ann Adelhart, who followed him to heaven 5 days later. George and Betty moved to Traverse City in 1961 where George began teaching math and physics at Northwestern Michigan College. He soon moved on to the new technology of computers, teaching computer programming and eventually running the data processing center and then to TBA as an administrator. Upon retirement, George continued his work as a volunteer for United Way, the Father Fred Foundation, the North American Vasa, and numerous other running, biking and ski races. George was an avid athlete all his life, beginning with the Detroit Rowing Club where he and his sculling partner, Bill Walker, won the national championship in the 150 lbs. double scull in 1960. To keep in shape for rowing, he ran. After moving to Traverse City, he began running with some of his college students which eventually turned in to the Traverse City Track Club. George was also instrumental in starting the Cherry Festival Race, the VASA ski trail and bicycling in the Traverse City area. Up until the snow fell, George could still be seen on his recumbent pedaling on the Leelanau Trail to Chimoski’s bakery. Surviving are George and Betty's four children, Mary Kuhn (John Ingwerson), Diane (Steve) Huff, Michael Kuhn, Matthew Kuhn; their six grandchildren Jeffrey Trombley, Nicole Trombley, Karlene Kuhn, Katheryn Huff, Stephanie Huff, and Theodore Huff; and four great grandchildren, Brayden, Elijah, Jaelyn and Brody. George was preceded in death by his parents, Bernard and Phyllis, and siblings, Bernard, John and Barbara Wyman. Mass of Christian Burial will be held Friday, January 15, 11:00 AM, at St. Francis of Assisi Catholic Church, Traverse City. Visitation will take place Thursday, January 14, from 4-6 PM at Reynolds-Jonkhoff Funeral Home. Memorial contributions may be made to the Father Fred Foundation or TART Trails, both of Traverse City. George and his family are being cared for by Reynolds-Jonkhoff Funeral Home, www.reynolds-jonkhoff.com

George R. Kuhn, of Traverse City, passed away peacefully on January 3, 2021. George was born in Detroit on July 17, 1932, to parents, Bernard and Phyllis Kuhn. In 1959, he married Elizabeth ("Betty") Ann Adelhart, who followed him to heaven... View Obituary & Service Information

The family of George Richard Kuhn created this Life Tributes page to make it easy to share your memories.