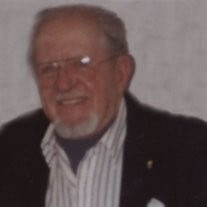 Traverse City - George Platte, 89 of Traverse City passed away December 27, 2013 at Tendercare Birchwood. George was born on January 31, 1924 in Detroit to the late Fred and Rose (Miesch) Platte. George honorably served as a member of the United States Army from 1943 - 1946. He was a tank commander and a gunner during WWII in the Philippines. On August 24, 1946 George married Gloria Brown at St. Gertrude's Catholic Church in St. Clair Shores. They made their home there until 1986 when they moved to Traverse City. Together they shared 63 years of marriage before she passed away in 2009. George was a devoted member of the VFW, the Carmelite Monastery and a parishoner of Immaculate Conception Catholic Church. In his retirement years, George enjoyed traveling abroad with his wife Gloria where they visited many of the places that the Blessed Mother has appeared. In his spare time, George enjoyed wood carving. George was preceded in death by his parents, wife Gloria, brothers Fred, Tom and Bob. George is survived by his son G. Randy (Beverly) Platte of St. Clair Shores, daughter Mary Elizabeth of Traverse City, seven grandchildren , Jeffrey, Jennifer, Matthew , Danielle, Christopher, Joshua and Joseph; great grandchildren; and brothers Bill and Joe and sister Rosemary. Visitation will be held on Sunday, December 29, 2013 from 2 - 5 pm with the Rosary to be prayed at 4:30 pm at the Reynolds Jonkhoff Funeral Home. Mass of Christian Burial will take place on Monday, December 30, 2013 at 11:00 am at Immaculate Conception Catholic Church with visitation held one hour prior. Graveside services will take place in the spring at Grand Traverse Memorial Gardens where he will receive full military honors. Memorial contributions in memory of George may be directed to Mass Intentions at Immaculate Conception Catholic Church.

Traverse City - George Platte, 89 of Traverse City passed away December 27, 2013 at Tendercare Birchwood. George was born on January 31, 1924 in Detroit to the late Fred and Rose (Miesch) Platte. George honorably served as a member of the... View Obituary & Service Information

The family of George Peter Platte created this Life Tributes page to make it easy to share your memories.