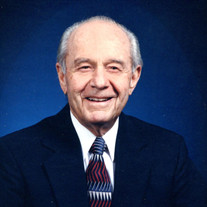 George W. Powell, 99, of Traverse City, passed away Wednesday, July 8, 2015 at Traverse Victorian Assisted Living, with his loving family at his side. George was born on December 21, 1915 in Hillview, IL to the late George R. and Addie (Hunnicut) Powell, one of 13 children. He married the late Lillian G. Knapp on June 25, 1949 in Reed City, MI. Together they lovingly raised two daughters, Shelly and Paula. He honorably served our country in World War II, in the United States Navy, stationed in the South Pacific. George and his six brothers all served in WWII at the same time. They were recently featured twice in the Chicago Tribune (chicago tribune.com) in articles detailing their experiences in the war, and of the Illinois legislature’s passing of a bill to rename part of highway route 67 to the “Powell Brothers’ Memorial Highway.” George worked many dedicated years as District Supervisor for Northern Michigan, for the Michigan State Liquor Control Commission, retiring in 1978. He moved to Traverse City in 1946 where he enjoyed spending time outdoors, especially boating with his family, and as an avid fisherman. He and Lillian enjoyed spending winters in Florida for over 20 years. George was an awesome fisherman and caught many Snook from the bridge in Matlacha, FL. He was also an expert in catching Whitefish on both East and West Bays in Traverse City. George was a proud member of the Elks for 67 years, and was one of the original members of the Presbyterian Church in Traverse City. George was a wonderful husband, father, grandfather and great-grandfather. He was such an inspiration and set an excellent example for his daughters, sons-in-law, and grandchildren. A true gentleman in every way, everyone who met him was immediately his friend, as people were attracted to his kind, generous, and sincere personality. One friend’s description of him was, “he was a man’s man, had a handshake like a vise, and a heart of gold.” Although small in stature, he carried a powerful persona as was necessary in his line of work. He taught his sons-in-law and grandsons proper etiquette by example. George took pride in being a meticulous dresser and maintained a garage as clean as many living rooms. He was able to drive his car until the age of 97. An avid Tiger fan, George was rarely seen without his ball cap but was quick to criticize their playing abilities if they didn’t match up to his standards. Until the last year. he walked at a pace that few could maintain and could often be found on top of his ladder cleaning out gutters or painting trim. He had a mutual love and respect for all his caregivers at the Pavilions Rehab and Traverse Victorian Assisted Living. The family would like to extend a special thank-you to Traverse Victorian Assisted Living and Pavilions Rehab for their loving and compassionate care. Also a sincere thank-you to Dr. James Milliken, Dr. Kevin Clayton, Northwest Michigan Long Term Care Specialists, Dr. Stanley Smyka, Dr. Scott Sneed, Gail Cinniger and Patti Baker. He is survived by his 2 daughters, Shelly (Paul) Appold , and Paula (Vince) Prusick all of Traverse City; five grandchildren, Katie (Jon) Venuti of Wesley Chapel, FL; Angie Appold of Austin, TX; Ashley (Jon) Insana of Traverse City; Vince (Kate) Prusick of Lexington, KY; and Parker Prusick of Traverse City; three great-grandsons, Graiden Insana and Mason Insana of Traverse City; and Luke Venuti of Wesley Chapel, FL. One sister-in-law, Betty Powell of California survives, as well as well as many other family members and friends. George was preceded in death by his parents, wife, Lillian of 62 dedicated years, 10 brothers; Adrian, Arthur, Bud, Charles, Earl, Floyd, Fred, John, Everett, Max, and 2 sisters; Sophia (Fred) Sheffield and Ruth (Bill) Murgatroyd. A memorial service for George will be held at the Presbyterian Church, 701 Westminster Rd., Traverse City, MI, on Saturday, August 8 at 1:00 p.m., with visitation one hour prior to the service. The Rev. Jose Lopez will officiate. In lieu of flowers, memorials may be directed to the Father Fred Foundation, 826 Hastings St., Traverse City, MI 49686 or to the Church. Please share memories of George with his family by way of his online guest book at www.reynolds-jonkhoff.com. The family is being served by Reynolds-Jonkhoff Funeral Home and Cremation Services, 305 Sixth Street, Traverse, MI 49684.

George W. Powell, 99, of Traverse City, passed away Wednesday, July 8, 2015 at Traverse Victorian Assisted Living, with his loving family at his side. George was born on December 21, 1915 in Hillview, IL to the late George R. and Addie (Hunnicut)... View Obituary & Service Information

The family of George W. Powell created this Life Tributes page to make it easy to share your memories.