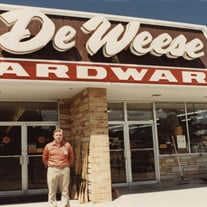 Michigan native and founder of DeWeese Hardware in Traverse City, George DeWeese passed peacefully July 5, 2020 after a four-and-a-half-year struggle with an incurable cancer, mesothelioma. He was 88 years old. George was born to Robert John DeWeese and Elizabeth Mae McIver on June 11,1932 in Strongs, Michigan. George was the youngest in a large family of five children. His oldest sister, Bonnie Rivala, was a strong positive influence in his life growing up. He referred to his sister as the “nicest person he has ever known.” He attributed her love, guidance, and support to keeping him on the right track and to getting him into the US Air Force and on the road to a better life. George served for four years as a Provost, Special Investigator in the US Air Force where he worked on special assignments with the FBI in the Southwest Region of the United States. One of the proudest days of his life was when the Michigan State Police badge was pinned to his chest certifying he had passed the academy training. He said it was one of the most difficult and diverse trainings he had ever experienced. He was first stationed in Traverse City, Michigan and lived above the police post on Division Street, along with two fellow officers and Cochise, his whitehaired German Shepherd and partner who frequently road shotgun with him. Shortly after arriving in Traverse City, George met the love of his life of 63 years, Traverse City native Sally Kucera. Their love story stayed true to the other captivating and humorous stories of his life. George met Sally when she was home on break from airline school. He gave her and her girlfriends directions to 4 Mile Road from 3 Mile Road and the rest was history. George and Sally built a beautiful life and home. They went on to have three children and four grandchildren and were active members of the community. They helped to build up the commerce on the East Side of Traverse City throughout the years with their growing business which has encompassed generations of families to whom they are forever grateful. George opened DeWeese Hardware in 1961 after taking over half of the convenience market owned by his inlaws, George and Anita Kucera. He knew nothing about hardware or business but let the voices and needs of his customers guide him. This knowledge and care soon helped his store become a staple throughout the community. “If you can’t find it at DeWeese, they don’t make it,” was a standard that George strived to achieve. This was the premise behind his store’s tag line, “Home of the Left Handed Widget,” and the concept behind the development of the “Bolt Bar.” George was a strong advocate of training his team to be expert problem solvers so they could help his customers become more knowledgeable, more confident, and truly “do it themselves.” This approach steered his store into more of a neighborhood gathering spot rather than a retail mecca. He believed that honesty, hard work, and service were the key to being successful. His other secret ingredient was his wife, Sally. He regularly referred to her as a “brilliant partner” in both life and business. Some of his favorite times later in life were working in his yard, taking bus trips with his wife around the United States via the Senior Center, and spending time at his beautiful cottage on Lake Leelanau. He also loved hunting whitetail deer on his 80 acres in Leelanau County with his son, Robert DeWeese; following the concerts, musical career, and life of his grandson Myles Boothroyd; and spending time with his daughter and son-in-law, Tanya and Pete Boothroyd, at their home on the West Side of Traverse City in Slab Town. During George’s younger years he was an amazing athlete and baseball player. He was fast, never dropped a ball, and he was a strong hitter. He loved this sport because it was played in open spaces and in good weather with supportive, enthusiastic fans in the stands. This is a perfect parallel to who George was and how he liked to live his life. He was an amazing provider to his family and community and a one-of-a-kind human. He will be gravely missed. George and his family are deeply grateful to Dr. Andrew Riddle, Nurse Tina, and the care teams at the Munson Cowell Family Cancer Center and at the Hospice House. Due to the current state of the COVID-19 pandemic, the family will hold a private military procession and burial service. George was a 32nd degree Mason. Please make memorials to the local chapter of the Traverse City Masonic Lodge #222, the Cowell Family Cancer Center, or the Munson Hospice House in lieu of flowers.

The family of George "Swede" Malcolm DeWeese created this Life Tributes page to make it easy to share your memories.

Michigan native and founder of DeWeese Hardware in Traverse City,...