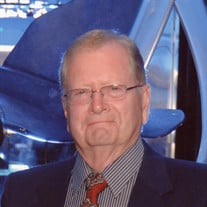 TRAVERSE CITY – George Thomas Swogger, 80, of Traverse City, died unexpectedly of natural causes at his home on Sunday, July 26, 2015. George was born in Grand Rapids on Tuesday, July 9, 1935, the son of Lloyd Clyde and Harriett Althea (Randall) Swogger. Following his graduation from Shepherd High School in 1953, George served our country as a member of the U. S. Navy, aboard the USS Lexington. On Saturday, May 21, 1960, George married the love of his life, the former Joanne Margaret Judge at St. Leo’s Catholic Church in Winn. Together, they celebrated 55 years of marriage. George began his work career as a dairy farmer in Shepherd. Then he entered into business with his brother, operating Swogger Standard Service in Shepherd. In 1964, he and Joanne moved to Traverse City. At that time they opened Swogger Standard Station at the corner of Front and Park Street. George operated the popular Swogger Standard Station from 1964 until 1976, then known as Swogger Amoco Station. In 1977, George established Swogger Tire Service, which he operated for more than 20 years. He then enjoyed part time work during his retirement. George loved to hunt, especially pheasant and deer, enjoyed golfing, socializing with his “Reeberom” friends, and travelling. However, all of George’s career accomplishments and hobbies, as summarized above, took a very distance backseat to the greatest joy in life; his family. His number one priority always was being in the company of Joanne, his children, his grandchildren, and his extended family of sisters- and brothers-in-law and their children. He is survived by his wife Joanne; his children, Pat (Sherry) Swogger, Amy Swogger and Michael (Sharon) Swogger, all of Traverse City, Audrey (Steve) Beyer of Macomb; his grandchildren, Bryan Reagan, Nicholas and Steven Swogger, Hunter and Bailey Swogger, and Margaret and Elizabeth Beyer. Also surviving is a sister Mary (Richard) Grace of Alma, nieces and nephews and many loving relatives and friends. George was preceded in death by his parents and his brother Arthur. Visitation for George will take place from 5 until 8 p.m. Wednesday, July 29 at The Reynolds-Jonkhoff Funeral Home. The funeral service will take place at 11 a.m. Thursday, July 30 at Christ the King Catholic Church with Father Raymond Cotter officiating. The family asks that George be remembered through memorial contributions for the benefit of Bryan Reagan (George’s grandson) C/O Michael Swogger, 10691 E. Carter Road, Suite 103, Traverse City, MI 49684 (checks should be made payable to: FBO Bryan Reagan) or to the Area Agency on Aging, Northwestern Michigan, 1609 Park Drive, Traverse City, MI 49686. Please share your memories of George as well as thoughts for the family by visiting George’s online guest book/tribute page at www.reynolds-jonkhoff.com. The family is being cared for by Reynolds-Jonkhoff Funeral Home and Cremation Services.

The family of George Thomas Swogger created this Life Tributes page to make it easy to share your memories.